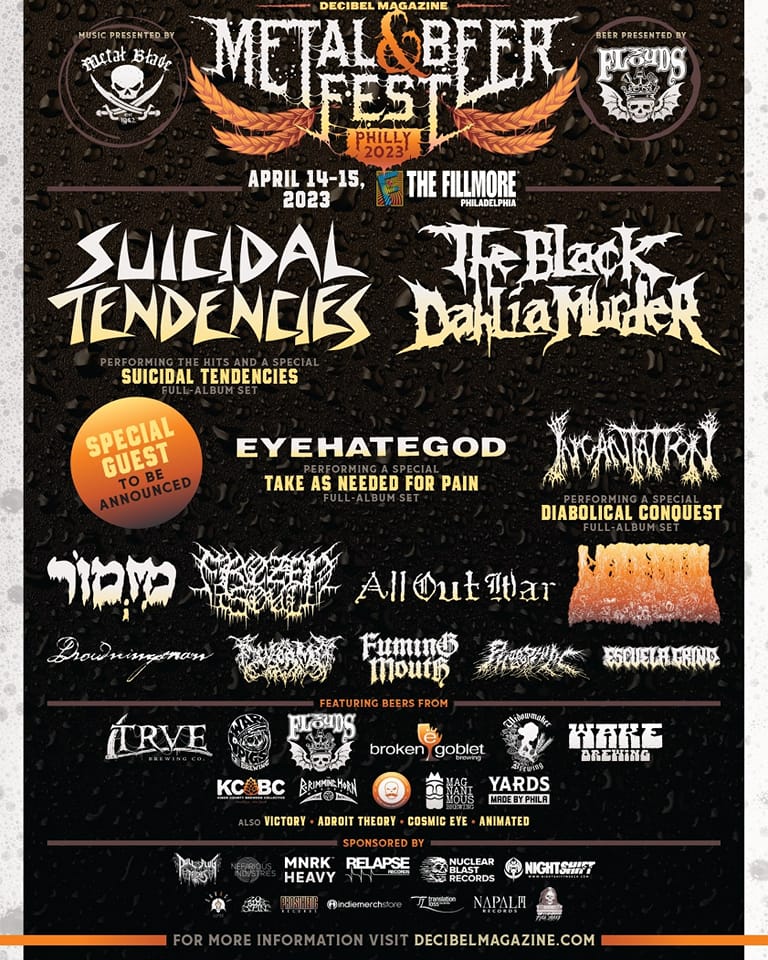 Fans are coming down from their high of this weekend’s Decibel Magazine Metal & Beer Fest Denver, which was held on December 2nd & 3rd at the Summit Music Hall with Cannibal Corpse headlining alongside Dark Funeral, Immolation, Black Anvil, Oryx, and In The Company of Serpents on night one, and Pig Destroyer headlining alongside Skinless, Wayfarer, Thantifaxath, Of Feather and Bone, Wake, and Glacial Tomb on night two.

Decibel Magazine announced their next Metal & Beer Festival is taking place in Philadelphia, Pennsylvania on April 14th & 15th, 2023 at The Fillmore. While there is still a special guest to be announced for the event, The Black Dahlia Murder are making their East Coast return to headline the first evening of the event, honoring the memory of Trevor Strnad, presented by Metal Blade Records! Mizmor, Frozen Soul, Worm, and Phobophilic are also set to perform.

On the second evening, fans will be treated with a headline set from Suicidal Tendencies performing their 1983 self-titled debut album in its entirety, as well as their fan favorite songs from their discography. EYEHATEGOD are performing their 1993 Take As Needed For Pain album in full, and Incantation are performing their entire 1998 Diabolical Conquest record. All Out War, Undeath, Drowningman , Fuming Mouth, and Escuela Grind are sharing the stage for the evening.

And always remember, drink responsibly and don’t fucking drive drunk! Uber it, Lyft it, taxi it, find a designated driver, or if you live close enough, walk! 🙂