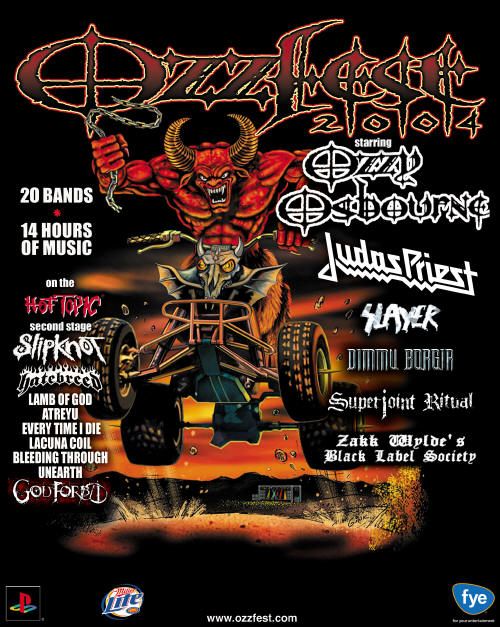 Imagine…You’re in the pit at Fiddler’s Green Ampitheatre in Greenwood Village, CO…It was evening, it was a little cloudy and cool outside, the air still damp from it raining earlier in the day…You’re 16 years old, you had just came from the second stage experiencing that terrified excitement from your first moshpit ever, you are experiencing Braveheart type stuff, especially during the song Black Label by Lamb of God. You are in awe of a woman screaming their guts out up on stage, who is the amazing Otep Shamaya. In no particular order, you also have just watched Hatebreed – who you are fucking pumped about and swear to go see them again, Darkest Hour, God Forbid, Unearth, Every Time I Die, Lacuna Coil, Bleeding Through, Magna-Fi, DevilDriver, and Atreyu… All of this being headlined by Slipknot.

As you’re watching Black Label Society now… You’re wondering how close you can get to the front to see that beautiful and iconic bullseye guitar… You’re standing in awe a few rows back at the fact you’re watching Zakk Wylde, who you’ve read about in so many magazine interviews and watched on Headbanger’s Ball…And you’re wrapping your head around the fact you’re going to see Black Sabbath headline tonight….

As BLS’s performance ends, you make your way to the other side of the stage…A path opens up to the very front-right-side of the crowd…Your neck is mildly sore already from headbanging all day and you notice a few bruises on your arms, probably from making your way to the very front during Lamb of God…You see this band called Superjoint Ritual walk on stage, that vocalist reminds you of someone…Who is it……You see the Body and Blood, Joy and Pain, Life and Death tattoo immediately…

WHATTTTTT!!!! THAT’S PHIL ANSELMO FROM PANTERA!!!!!! And he’s wearing a vest with the arms ripped and “PENTAGRAM” sewn on the back and he has both sides of his head shaved…You’re standing parallel to the guitarist with the black dreads [Kevin Bond] , he slowly is exhaling smoke in a trance playing guitar, points at you, and tries to throw you a pick…You’re feeling pretty fucking great that you just saw your favorite Artist play in a different Metal band!

….The next band playing is Dimmu Borgir, who you knew from watching the Progenies of the Great Apocalypse video that was aired on Vh1’s Headbanger’s Ball a lot…The bald guitarist, who you later find out name is Balder, looks at you and flashes an awesome Metal face at you as you’re headbanging along to every song…How cool you think to yourself…You also wonder for a split second how you’re even still headbanging as you’ve been doing this all day…It must be the power of the live Music…That’s the only explanation. They walk off the stage…

You’re pinned at the very front of the barricade in front of the stage, feeling the warm breeze and smelling the human-induced humidity in the air with the scent of sweaty and damp t-shirts that are mostly all black, mixed with whiffs of electrical tape and rubber from the cables and amps on the stage…You smell marijuana drifting around, with the pungent stench of whiskey being spilled and drank, sticky energy drinks on the ground, beer breath, and cigarette smoke hovering above all of us in the crowd.

The Sun slowly revolves around the Earth as the skies turn red and the thunderous rumbles of Dave Lombardo’s drums travel through the hazy orange-gray fog immersing the crowd, the sound of Tom Araya’s fingers hitting the bass shaking the grounds beneath the sea of thousands and thousands…Feeling the electrifying wails spiraling into the bloodied madness bouncing between Kerry King and Jeff Hanneman, you now feel the sky’s crimson tears and the blood raining down on you as the locusts begin to swarm above your head.

Your mind suddenly wakes into reality and realizes it’s really a swarm of translucent brown bottles raining beer over you instead. Tom Araya, Kerry King, Jeff Hanneman [Rest In Peace], Dave Lombardo all look to the crowd ruthlessly smirking with approval as the security guards below exchange glances, shaking their heads in awe at the insanity unfolding in front of their eyes…As Raining Blood radiates into the blackening skies and the buildings shake in the distance, we headbang harder and faster, there is no control over our souls as our bodies viciously shake until the music stops and we feel our minds split and bleed out from our eyes, with the blood rolling down our cheeks. As the set ends…We raise one arm, if not both in unison with the Metal Horns, looking at everyone around in the crowd, nodding our heads, agreeing without even speaking, comprehending that we just lived through this journey being taken through the Abyss….Feeling the aftermath of our self-inflicted whiplash, letting out spontaneous yells while hearing the guttural howls of “FUCKING SLAYER!!!!” dance over the crowd as we prepare ourselves and recover from the aural voyage we took South of Heaven for what is next to come with Judas Priest and Black Sabbath…..

You’ve been awaiting Judas Priest for a while now, ever since you first heard about them on Vh1… You’ve constantly heard their songs all throughout your Life, you have Breakin’ The Law, Turbo Lover, Livin’ After Midnight, Painkiller, Freewheel Burning, and so many more pretty much memorized from watching music videos, or hearing them on the radio… They finally hit the stage… You yell and scream the words, or what you think are the words, or just make up your own language SHOUTING along out of tune… You think to yourself that you must listen to their entire album collection as you see Rob Halford emerge again on stage on a black motorcycle to play a few songs… Closing the set with Livin’ After Midnight! You are in pure bliss….

You take a look around the crowd that’s illuminated by the bright lights of the amphitheatre that fade into the cloudy black sky… And now you get to see Black Sabbath…Holy fuck. They are the ones who invented Metal…. You stand with a little nervousness, your stomach tingles with excitement as you see the Prince of Darkness himself walk on stage with Toni Iommi, Geezer Butler, and Bill Ward…You’re standing face to face with Toni Iommi…. Is this really happening, you think. That iconic cross hanging around his neck…. You turn your head, you look to the right at Ozzy clapping his hands above his head…….YOU’RE SINGING ALONG TO WAR PIGS WITH THE ENTIRE BAND!!! ”GENERALS GATHERED IN THEIR MASSES…….. JUST LIKE WITCHES AT BLACK MASSES!!!!!” – you sing to the top of your lungs with everyone else singing along… You’re thinking, ‘WHOA…. THIS IS SURREAL’. He’s singing Iron Man now…EVERYONE is singing this song…It just makes you scream the lyrics even louder…We all are in perfect harmony…The show ends with Paranoid as confetti explodes from the stage…. You stand there for a moment not moving, staring at the stage being cleared…The crowd clears out… The sky is now black… There’s an after-haze in the air of trampled grass, alcohol-soaked mud, cigarettes, some weed, and the smell of those new shirts you bought laying across your shoulder.

Something in your mind is different now…Your body even feels different… You hear the soles from your combat boots sticking on the concrete as you walk to the car already reminiscing about all of the guitar solos, trying to remember the lyrics of songs you didn’t know so you can go look them up tomorrow, the different bands you’ve seen that you’ve only heard on album before…Your mind is buzzing, but it is clear…You feel rejuvenated…You lay in bed, close your eyes, listen to the loud constant ringing in your ears as you see the images from the concert that have flashed by with your eyes closed…You go to bed with a smile on your face…You wake up…You can barely move your neck…Your body covered in bruises…You’re pretty sure your rib is cracked from being crushed against the security wall…Your ears are still ringing and the energy is flowing through… You take a step outside inspired with a clear head and sound mind and a fire ignited inside.