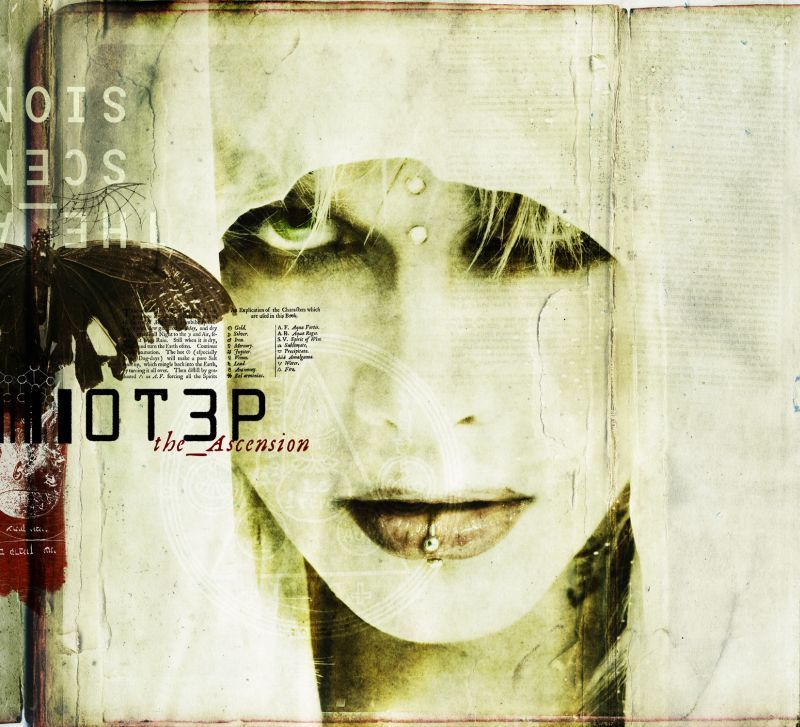 In honor of Otep’s new album to be released soon, we decided to go back and take a look at one of our most favorite Otep albums. In March of 2007, Otep released her third full-length album following up to 2004’s House of Secrets titled, The Ascension, through Koch Records. The lineup on the album consisted of Otep Shamaya herself as the lyricist and vocalist, bassist Evil J, drummer Brian Wolff, pianist Holly Knight, and guitarist Karma Singh Cheema. There were also a few songs on the album in which Greg Tribbett from Mudvayne and HELLYEAH contributed with on writing. The album was recorded, produced, and mixed by Dave Fortman, who has worked with Southern Isolation, EYEHATEGOD, Superjoint Ritual, Slipknot, and Mudvayne. Mastering was done by none other than Ted Jensen, who has mastered thousands of albums throughout the years that ranges from Bob Marley & The Wailers to The Eagles to most recently Ghost, Zac Brown Band, Dorothy, and even Nickelback!

The album starts off with the song Eet The Children as Otep is singing in a soft, demented voice, “hush little baby, don’t make a sound…..” as an ominous and sharp sound emerges and she keeps going, “hush little baby, don’t make a move…… this is going to hurt me….more than you…..” And then the song kicks in full force with a sound of bass, the guitars, and drums flirt with eternal doom, as her vocals intermingle between soft and harsh, yet with sporadic psychotic episodes, especially toward the end.

The second track, Crooked Spoons, opens with Otep whispering, “Don’t take me down..where the baptized….” and then the song kicks in with her screaming, “drown!” … The song slows down the tempo with Otep singing and rapping poetry with vivid imagery of her depiction of Hell, where ‘genocide lines the hall’. You hear those drum beat heavily kick in right before the chorus blasts you in the fast with blunt force screaming. Then slows down again with quiet rapping, and kicks in again with the heavy chorus… As it nears the end of the song, you really hear Evil J’s signature tuned down bass lines throughout and then suddenly stops playing all Music in the midst of Otep screaming “I sleep to deep for you to wake me up!!!!”

The third track is titled Perfectly Flawed, it begins with Holly playing a simplistic piano riff. Otep’s soft, raspy, whispery vocals kick in. The empowering song focuses on the message of being “perfectly flawed” and being perfect the way you are, despite how we all can be our own enemy, however we’re perfect the way we are, no matter what we think about ourselves, or what anyone else may think or say. We’re always a work in progress, and whatever you or anybody think your imperfections are, that’s what makes us all unique, and we’re each perfectly flawed.

“A disguise of self-deception,
Hides my secrets perfectly,
I’m rejecting my reflection,
‘Cause I hate the way it judges me”

The fourth track kicks you in the Soul with high volume, with the song Confrontation. It’s a song about standing up for what you believe in, especially with all the bullshit, UNNECESSARY wars that have plagued our Mother Earth, and fifteen years later, the lyrics still ring true to this day. The song gives the heavy message “DON’T BE SILENT – STAND UP – SPEAK OUT – STRIKE BACK – THEY DON’T KNOW WHAT THEY’VE STARTED….CONFRONTATION!!!!!!!” And the song is just as heavy as the message, if not heavier with the Groove you hear with the mix of the drums, the riffs, and the bass as Otep raps until the choruses, where you hear full-fledge screaming.

One of the longest songs on the album at six minutes long is called, Milk of Regret. It starts off with lightly distorted guitars that have a slight Country twang to them, with tribal drums in the background. Otep starts hauntingly singing softly, then about forty-five seconds into the song, you hear the guitar tune down and build up anticipation as Otep’s vocals create tense moments with her whispery vocals to straight up screaming…And then the violence begins within the Music…. Three minutes and thirty seconds into it, it slows down a bit, you hear Evil J’s bass lines as Otep starts singing a hook with guitars in the background sounding like dancing fire, “this is the perfect place, to hide the crime, and burn the remains”….And then it goes straight back into the heavy, violent amalgamation between the vocals, the guitars, bass, and drums throughout the rest of the song. And at the very end of the song, it features a creepy version of children singing Jesus Loves Me as you hear static overlayed.

Noose & Nail is the sixth track that starts off with rolling guitar riffs full of more Groove. You can almost hear a slight Tool influence within the movements of the riffs. Brian’s drums have a very sporadic Life to them in this track, they’ll go from melodic and slow, and then you’ll hear them kick in with the fast and heavy with the bass drums in between the vocals. The song lyrically seems to be a tongue in cheek way of taking aim at the hypocrisies of religion as the figures are intertwined with certain drug uses. “The reality is worse than the disease.”

The seventh track is Ghost Flowers. It immediately starts with Karma’s deranged guitar chords intermingling with Evil J’s bass lines, creating an evil opening sound as Otep sings with her whispery voice of her dark poetry, “cut me open, with precision, and we’ll finger the incision….”…Then the bass line really kicks in as the song builds into another heavy one. “You want to see me burn, I am living fire!” is one of the harsh, yet empowering messages in the song….The bass drums kick in heavily throughout the song as you hear every instrument at the same time, all sliding and rolling together perfectly…. The song’s lyrics are deep with metaphors and vivid, dark imagery. “She’s picking ghost flowers from her soul, she’s tonguing splinters from broken halos.”

The next track is Otep’s reimagining of the song Breed, which was originally from Nirvana’s 1991 album, Nevermind . It starts off with Otep speaking “Nirvana means Freedom from pain, and suffering from the external world.” And kicks into more of a Punk-Metal version than the original, with hard vocals, and some screaming intertwined along with more demented guitar riffs than the original has.

March of the Martyr’s is the next track and definitely one of the heaviest on the album. Once Otep’s flirty, yet sharp vocals kick in, the Music in the background takes a sinister turn with the bass lines & guitars sounding as if they’re in a whirlpool atop a tsunami, and then you hear some of the heaviest vocals from Otep in this song, especially nearing toward the end when she’s demonically screaming “PRAY FOR THE SLAUGHTER, THE MARCH OF THE MARTYRS!”

The tenth song titled, Invisible, slows down the tempo and harsh vocals… It’s more of a slower Hard Rock song with a dark ominous vibe… The bass drums echo the tribal feel again, as Otep’s sings about one of her personal journeys. You do hear harsher vocals nearing the end of the song, underneath her clean vocals, making for a beautiful, yet sadistic effect. The very end of the song, you hear Otep singing in acapella with a tearful, yet sincere vow to her Mother. It then rolls into the next track, Homegrown, which is one of the deepest songs Otep has ever written about her childhood experiences. And this by far may be the heaviest and most anarchic sounding on the entire album. You get chills listening to the lyrics and you truly feel the anger and trauma in the song, especially with the lyrics repeating, “FUCK! YOU! YOU INSECURE PIECE OF SHIT!” The song then ends with an off-the-hook phone echoing to a moment dead silence….

The twelfth track is called Communion. It’s a slower, yet harsh song where the instrumentals and vocals dance in between slow and soft, and then heavy and harsh, with emphasis on Brian’s bass drums, as Evil J’s bass intertwines perfectly within the beats, and Karma’s guitar riffs overlay and seep like blood everywhere and in between.

Adrenochrome Dreams is the last track of the album…. It starts off as pure silence for over three and a half minutes. If you didn’t have the album in front of you looking at all the tracks, you’d think the album ended with Communion….You’re suddenly surprised as you hear a dark, yet atmospheric guitar and bass come to Life… Otep is speaking poetry throughout the entire song reminiscing a dark, terrifying dream about hooded executioners with weapons, having to move in between them, and dolls hanging from nooses made of human hair, and creatures trying to feed off of her….. It’s quite an intense way to end the album.

Hey now! The album isn’t truly over….If you were one of the ones who bought it from Best Buy back in the day, you know there are two extra bonus tracks!

Special Pets starts with muted cowboy chords that go on throughout the entire song. The song is very rhythmic, especially with the drumbeats and hard vocals with screaming in between. The next song is titled, Necessary Accessories, and it’s the very last track. It has a hint of a Rap aesthetic to the vocals in the beginning, then it twists into Otep’s deranged, harsh vocals as it slows down to her whispery vocals, with the guitars and bass sounding as if they’re awaiting Death, with the drums propelling the execution. You can kind of hear nuances of Slayer riffs throughout this song.