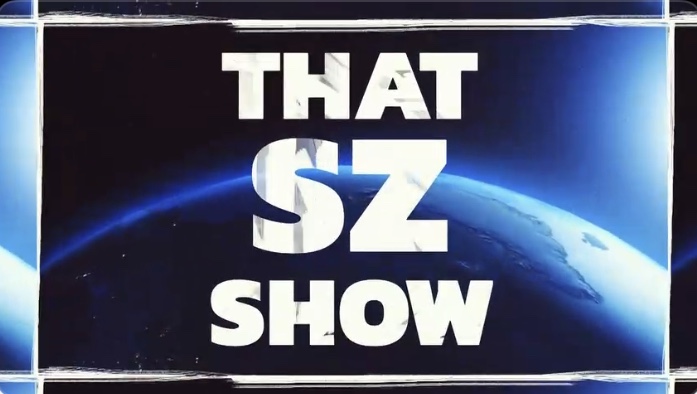 On Thursday June 17, 2021 That Space Zebra Show aired in the morning! It’s also called Starving Artists on Thursday’s because they allow people to submit to come on in the morning and play for everyone! While they play the chat can then donate to them to help them to get further in their musical career! So if you’re interested make sure you go to twitch.tv/dwpresents and go to the link to sign up! The show usually has Wes Borland, Bobby Schubenski and Josh Balz on it but this weeks was special. Instead of Wes and Bobby, Josh was joined by Father Dick and The Pool Guy. For those who don’t know, Father Dick is a priest character played by Wes and The Pool Guy is, well a pool guy, played by none other than THE Fred Durst of Limp Bizkit.

The show opens with Father Dick saying they’re not ready and to start the into again cause Pool Guy isn’t there yet. The Pool Guy shows up a few minutes later and falls into the couch when he shows up. Father tells Pool Guy thanks for being there even though he showed up late and Pool Guy mentions how he wasn’t late, he couldn’t find the place.

Josh and Father Dick ask The Pool Guy some questions concerning pools. Producer Jake mentions how he needs to get ready and puts on his pool gear. They have some pool noodles and little beach balls. Pool guy mentions how noodles are dangerous and says they can get stuck in the cavities and how he’s had to take some out of a couple drains.

The Pool Guy asks Father Dick if he’s highly religious which he replies that he’s the associate pastor at a church in Merietta, GA and how he’s also in charge of the youth groups. He mentions how the youth groups always raid him of his snickers. Josh asked if snickers are ever thrown in a pool and Father says that yes but when that happens they shut the whole pool down.

He’s then asked by Josh if he has to bless the pool every time his youth group goes to one. He mentions how he just has to touch the water and it’s all turned to holy water cause he’s around holy water so much. They then talk about whether or not if Jesus was around now a days and  owned a pool would he walk on water or would it turn to wine and he just fall in? They talk about it for a while. Pool Guy mentions how he wasn’t expecting this to be a religious thing and how he didn’t really believer Father Dick was a father until he got there and saw his outfit.

Josh asks how Father met The Pool Guy and he’s told by Pool Guy that he saw how dirty the Wimmer’s pool is and decided to offer his services to them since he cleans pools for free. He mentions how he’s trying to save their souls and save any puppies and kittens and anything that might be stuck under all the stuff in the pool. Josh asks if thats why Father is here then, to help him with saving souls. They talk a bit more about the Wimmer’s basement and the pool. Pool Guy has been cleaning their pool for 10 years but got lost when he showed up for the show.

Josh asks Pool Guy if anyone has ever asked him who he really is and what drives him to be The Pool Guy. He responds with that he’s a reflection of everyone and like pool service on a calm day. Father Dick then asks him what happens when there’s an earth quake and his reply is that he doesn’t know and that that’s a good question. They chat some more about that and move on to roll call after Jake mentions that they haven’t done it yet! They call roll call and Father Dick waves his pool noodle around as they do so. Josh asks if roll call president can have one of the pool noodles but they deem them dangerous and that they can’t send one.

They chat for a while more about pools. Jake comes out to the main screen to show us his pool time outfit. They tell him he should take off his shirt and pants to be more ready for the pool. Father Dick asks some more ridiculous questions about pools and they continue to talk about that for a while. It’s definitely better to go watch it! The descriptions just don’t do all the hilariousness justice. Pool Guy asks Father if he can bless him and they do a high-five and he tells Pool Guy that he’s blessed now. He asks Father what kind of religion he is now and he tells Pool Guy that he’s whatever religion he wants to be.

Josh then asks if we can get a review of The Pool Guys services from one of the Wimmer’s. Pool Guy says “They probably don’t even know I’m here dude. Once I knocked and did it for free. I just sneak in when they’re gone.”  Father Dick makes a joke that he gets a stalk of bamboo and he gets in the pool and uses it to breathe under water and then when they walk by he grabs their ankles and pulls them in the pool. He mentions he’ll be under there for over  an hour sometimes and the chlorine makes his eyes red and it hurts but he thinks it’s worth it.

They talk a bit more and then they show off their matching shoes. Josh then mentions how there’s usually a lot of issues with leaks on the show and asks if there’s anything Pool Guy would recommend in that type of scenario where there’s just a lot of leaking. Father Dick responds before Pool Guy can with how the leakage is coming out of his butt. Pool Guy asks what kind of leaking and Father says how it’s a lot of discharge and foam. The subject then moves to cruising and how he has something to tell Father after the show but that he doesn’t wanna say it on the show.

Pool Guy notices the chat and mentions how there’s someone texting and asks what that’s about. They explain to him how he can interact with the chat and how the chat can hear everything the day and respond. Father tells the chat to spam “I’m the big boy with the pool noodle on the throne!” Probably the longest thing they’ve had chat spam. The. Pool Guy tells the chat to say “Tiny C and the incredible shrinking panty sniffer”. Jake asks him to repeat so the chat hears it right but he says how he’s only saying it once and wants to test to see who listens.

Father Dick blesses the entire chat by shaking his Pool Noodle at them. They chat more about how bad chlorine is and how everything causes chlorine. Josh tries to ask Pool Guy a question that I posted. The question was “how many pools do you clean in a year and how many times have you accidentally broke one?”  But because this is crazy this episode Father Dick goes on asking if adding bigger animals to the pool would expand the pool and other crazy animal & pool questions. Pool Guy is eating gummies and shows them to the screen cause he likes them so much. Jake brings up how soon we have Jeffrey Fallen playing for everyone today for donations.

Jake mentions how Pool Guy is there with Father Dick and Josh Balz. It makes Pool Guy ask “wait, wait dude Josh what?” So Father says “Josh Balz. The floating head”. Pool Guy says “Dude I’m sorry your parents did that to you man” and Josh says “They didn’t do it. That’s called life. I was born with it”. And then Father mentions if it was just Josh and him it would be the Dick and Balz show. They talk about that for a little bit longer. Then Father Dick goes on a rant about soap and how they put crabs in the soap and if they send it to outer space it’ll turn into a pool that will have waves you can surf in. Pool Guy mentions the gummies again and then points out the ukuleles that are sitting in front of them. Him and Father pick them up and mess with them for a minute.

Josh asks what kind of gummies he has cause he loves gummies. So Pool Guy tells him what they’re called and shows the bag to the camera. Then they get on a discussion about casseroles and what kinds they like. They talk about the ups and downs of casseroles for a bit. They take a couple more chat questions before moving on. Father Dick and Pool Guy mess around with the pool balls and a pool noodle. Then Pool Guy mentions how he’s sorry about Josh’s last name and says he’d be clowning him all day if he knew his last name. They joke that Pool Guys name is Don Diarrhea.

Pool Guy relaxes and lays down on the couch. Then they bring in Jeffrey to play! They get a little background on Jeffrey and he mentions how he’s from California and is in a band called Final Fall. They chat with him for little bit and then he starts playing. While he’s playing Pool Guy seems to be sleeping and he wakes up randomly saying that he was having a terrible dream and asks what the shit he’s hearing is. Then lays back down and seems to be asleep again. Pool Guy does this again another time or two while he plays. At one point Father pokes Pool Guy with a pool noodle and they start fighting with their pool noodles. They chat some more in between songs as well and Pool Guy shows off the gummies yet again.

Father Dick is waving a pool noodle and beach ball around Pool Guy asks what he’s doing and Father says it’s to ward off the demons. Pool Guy joins him in doing this for a little bit then gets up and asks where the music is coming from. They listen to Jeffrey play and then Pool Guy randomly gets up during the last song and just leaves. Father keeps warding off demons during the last song and they talk to him for a few more minutes. After they see him out Father mentions how he doesn’t wanna see anyone on his screen and then Jake asked him what he thought of Pool Guy. Father says he’s probably gonna leave too and mentions how he’s done with the show and the pool at that house cause it’s making everything smell like vinegar. They talk a little longer. Then they do a giveaway of a $50 Strange and Unusual gift card and a photo of Father Dick’s pool noodle that’ll be emailed to the winner. They tell the chat to spam Skunk Butt and pick a winner at random. Jake mentions the upcoming shows and the show ends.

Don’t miss out on any of DWPresents shows! Go follow & subscribe to them at twitch.tv/dwpresents! Here’s a schedule so you know when each show will be on: