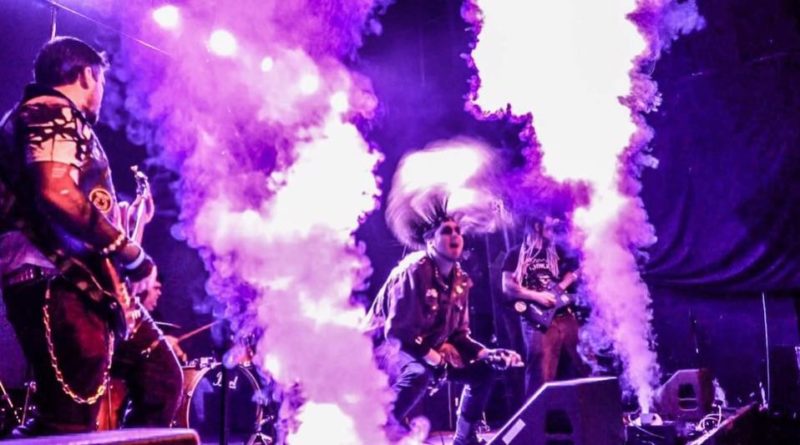 On the night of Halloween 2017, theatrical Hard Rock band from Bellingham, Washington, Cryptamnesia was born.

Lead singer, Ticker Twizted aka Josh Hamilton, contacted the members of his side-project, The Orchestra of Death, shortly after breaking up with his previous project, Ravages of Time – it was then, he formed Cryptamnesia. The 4 members quickly created content and had their first show at Tony V’s Garage.

Independent label company, Momma Lynn Management, followed Ticker from his previous project and assisted in building Cryptamnesia. They recorded their first EP, Bump In The Night at Studio Sage. They have been gaining attention by creating their own music videos through Ticker’s cinematography business, Twizted Images Cinematography.

“I took the hard rock concept from my prior project and gave it a little spooky edge. We officially play “monster rock”, but we’re still working on getting our look together. The word Cryptamnesia, which is spelled Cryptomnesia, is a real term that means to remember past life memories, and memories in the afterlife. I felt it was meaningful with my past, and added to the creepy brand I was trying to create.
It felt natural once the four of us started getting the ball rolling. The chemistry was instant. Its hard to find that. It takes a lot of sorting out band members to find the right groove but we got lucky. About six months later we found Germ (lead guitarist) who recently still plays in a band called Bacon Grenade. He had heard of us while working his night shift job and tried out. Germ also had instant chemistry and his lead guitar skills were sexy so like a perfect puzzle piece we added him to our group and we couldn’t be happier.”

Their stage names all have meaning and purpose.
Josh Hamilton aka Ticker Twizted gets his name from the fact that he has Tourette Syndrome. He’s gone by Ticker since he was around 11 years old.
Saryn Greymourn aka Thomas Queen is just a really “rad, grim” name that fit his personality.
Michelangelo Gilchrestius is an addition to his real name, Michelangelo Gilchrest. Gilchrestius was his stage name for The Orchestra of Death, so he carried it over.
Arron Kirby aka Akon goes by his name from his former friends and bandmates.
Jeremy Bermejo’s nickname, Germ, which is a dirty and sexy derivative of his first name.

“We’ve all got similar tastes in music, while some of us like music the others don’t. Our style is inspired by a little bit of everything. We love Rob Zombie, Pantera, heavy synthed industrial music, and there is some punk rock inspiration from Akon and Gilchrestius. I think the combination of all of that makes us stand out a bit. Our music is deep and about real shit, sung about metaphorically.

For example Poltergeist isn’t just about a mischievous ghost – its about never letting your haters “kill” you and what you stand for. We play hard rock with punk rock edge, but we love adding creepy sounds and fx to our music. We just play what we love and what sounds amazing. If you don’t get really excited about it, its not the right song. But so far we get really excited about it. What helps set us apart is our dedication to theatrics as well. Shooting fire from our hands, geysers, smoke – putting on a visual show. We sing to “monsters” which is a name we give to those who are troubled, rude, crazy, unique – we say “don’t be a better person – be a better monster.”

Our EP, “Bump in the Night,” is just the beginning. Its a solid hard album that feels great for the foundation of what is yet to come from us. We plan to go harder, and we plan to go creepier. We will always carry a heavy presence on social media since we believe creating plenty of music videos is the way to go. Our previous work were large stepping stones to get to where we are today. I feel that we all crafted ourselves from our past experience and found ourselves, and now we are only building onto our personal brands and just working to master them.

We are releasing a music video every month till October for multiple reasons. Its fun, and we have the resources. We’ve noticed that some of the great bands out there have really put effort into creating video content because its something the fans can enjoy and sometimes even be a part of. We just finished our shoot for Until the End and there were several people involved that are so excited to see the final product.

Video content, to us, is important. You have to have a presence and you have to have a face online that people can recognize and relate to. Its an excuse for us to get together and have a great time. Our approach to this topic is that we want to play heavy but add elements of art and almost “beauty” in what we’re doing. We went and bought 200 pounds of flour to give the idea of a poltergeist, and to take amazing super slow motion shots. It was messy, and we still can’t get flour out of certain areas but it was so fun and everyone loved it.

We reached nearly 1000 views in less then a week. For the fans, or monsters, giving them music is great, but giving them video content that they can interact with us with online is even better. So, its a great interaction, its great art, and the monsters deserve it!

Anyone with problems will connect to us. We are open about our problems and its what bonds us as a band. We are constantly cracking jokes about how troubled we are. We are monsters, and we represent all the monsters out there. Through our content, our audience are those who are proud to be different and unique. We’ve been to hell and back, and it only built character.

A majority of bands don’t put enough effort in putting on a great show. You have to give your fans more then just great music – they can buy and listen to your album and listen to that, but when they pay to go to a live concert you have to give them a little more. You have to constantly find creative ways to give them cool stuff. Showing off our theatrical skills, interacting with our fans and giving them fun content – these are all things bands should consider.

We’ll gladly be the ones to demonstrate! In my past project, I (Ticker) once edited a full length 2D video game for our fans when we were on a one year hiatus. I created two full episode cartoons too. Why? Because it was fun and different. That’s what Cryptamnesia does – we try and create heavy, groovy metal, but we also create videos, and give our fans something fun to look forward to. We just covered Mad World and got a huge response from our crowd. Our manager, Michael Decker, wanted to instantly get us in the studio to cover it as a single. We’re really excited for that.
Sometime next year we will be recording our next EP, “Isolation,” and we have music video shoots August 3rd, September 21st, and October 20th. We will have a booth at the 1st annual Headbangers Con in Portland, OR Nov. 10-11th with GeeksterInk Legends on A&E! We will be shooting our Bump in the Night music video shoot September 21st and we need plenty of monsters for that shoot. It’ll be in Coupville at an old haunted 1908 house.