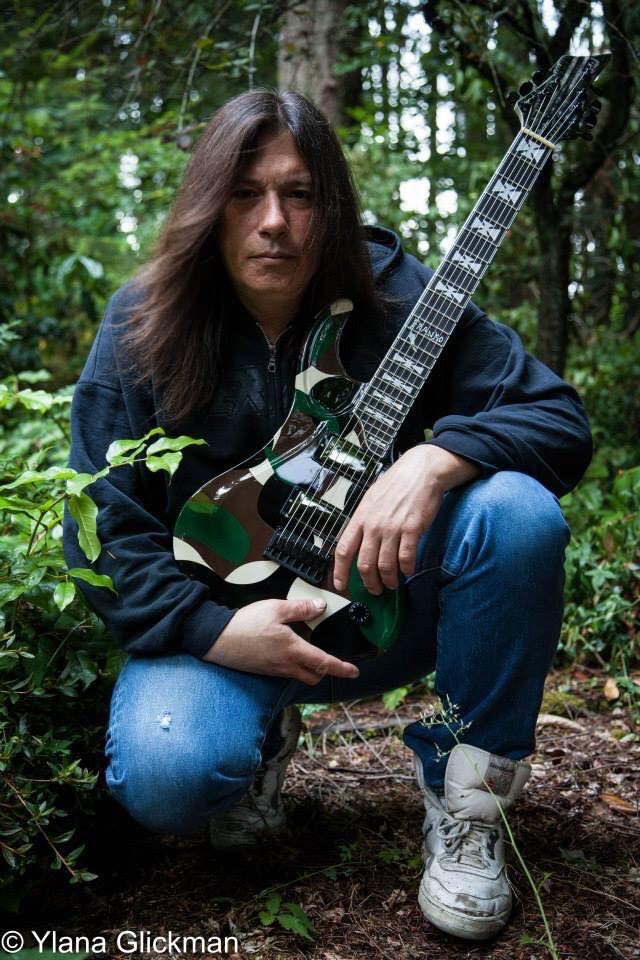 Beltfed Weapon is a Thrash Metal project that initially formed in Seattle, Washington in 1999 with guitarist Frank Hetzel and drummer Steve Sams, who met their bassist, Ben Layland, at the place they were jamming at. The name Beltfed Weapon came from Ben, who is a former Marine, they were wondering what to call the band, and Ben said they sounded like a machine gun and thus, came up with the idea of Beltfed Weapon. The band then dismantled as the other members went off and decided to do their own thing, but Frank decided to keep it going.

As a kid, For Those About To Rock by AC/DC was an album that hooked Frank on Metal, especially when he heard the song Spellbound. As time progressed, he got into heavier Music, “then Diary of a Madman came out and Iron Maiden – Piece of Mind, I always thought, ‘man, it would be so cool to play guitar’.  I was a late, late starter…I didn’t start playing until I was seventeen, and it was always a struggle for me. It was very difficult, I didn’t have a lot of patience, so it took a lot of time for me to even play much.”

It was when Frank was 26 years old, he realized he wanted to play Metal. Before Beltfed Weapon, Frank met a drummer named Mike Stevens, who passed away a few years ago, “Him and I collaborated, and we had some simple songs going, and I always believed in my Music and some of the riffs I had, and I always wanted to do something with it, and it just took a long time, and I never gave up…And yeah, it was really cool…And then I started taking some lessons, learning theory a little bit, I’m still trying to learn how to play lead guitar.”

After the band’s first dismantle, Frank reached out to his friends in the band, Uncle Betty, which featured Kirk Omalley on drums, and Russ Cumby on bass, for their first self-titled EP in 2001. In 2009, Beltfed Weapon released their Peacekeeper EP. The lineup features Frank on guitars, Nick Seelinger, who is from Hirax and Silencer on drums, Iian Jones on vocals, the original bassist Ben Layland, and Ritchie Wilkison, who flew in to track guitar solos on the EP. The band dismantled again as not all the members wanted to take on the touring Lifestyle.

Six years later, Frank decided to make Beltfed Weapon into more of a project for the Raining Plague EP that released on Halloween of 2015, “I decided at one point, I’ll just reach out to some people that I knew in the industry after I was a promoter, I used to promote the Seattle Metal Fest and the Northwest Death Fest for a few years, so I started reaching out to people to do the next album, which was Raining Plague in 2015, that features Steve DiGiorgio on bass, which is really cool because he was interested in being involved in it, and Fredrik Widigs from Marduk, amazing drummer. I got a hold of him before he joined Marduk, and sent him songs, and he was down to play on the EP. He did an amazing job, there weren’t any fixes to do.”

Dean Sternberg, who is from a project with Van Williams called Pure Sweet Hell is on vocals, and Frank’s friend Andy Beech from D’haitre Guitars played the solos on most of the record. Jeff Loomis played a solo on Darkness Falls, where he and Andy collaborated a little bit on the solo, and the end solo on that song is from Matt Wicklund of Ghost Ship Octavious. Van Williams created the album Artwork.

Frank wrote the lyrics for two songs on the Raining Plague EP, Black Matter Clarity and Mind Rape, which he cites as one of the hardest songs he’s ever written, when it comes to playing, Frank joked, “the endurance of those riffs are insane, I have to warm up for a good three weeks before I can pull those off.”

In 2018, Beltfed Weapon released a single titled P.O.W. with Ronny Munroe from Trans Siberian Orchestra and also Metal Church. They did it as a cancer benefit for Ronny’s wife who passed away, “I thought it was really cool how Ronny Loved his woman so much and he was going through a really tough time, and I saw what he was going through,” Frank thought it would be nice to raise money to help the situation out.

Frank had the song sitting around for a while and always wondered what it would sound like if Ronny Munroe sung on it, “I had no idea that we would ever work together until I approached him in 2017, and he liked the song, he liked the idea, and we went for it. It was really cool to do that. Quite a few people supported it and helped out. We both thought it’d do a little bit better than it did. That’s ok, that’s the Music business sometimes.” 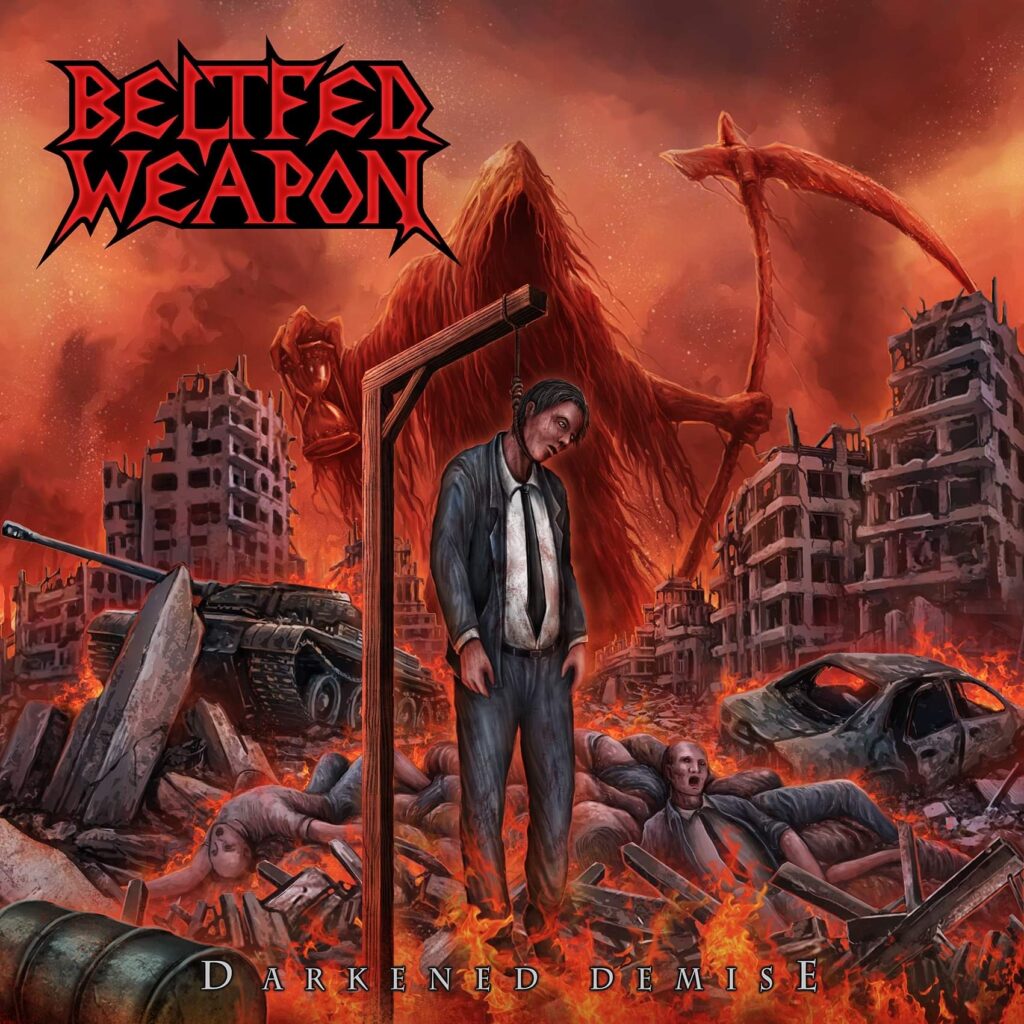 Fast forward into 2022, Beltfed Weapon have released two new singles for their upcoming Spring 2023 five-track EP titled, Darkened Demise. “It’s funny how I came up with the concept, one day I was sitting around, and the words “Darkened Demise” just came into my head, never heard of that before, and I was like, ‘man, that sounds like a cool song title’ so I Googled it, it gave me the definition of the Death of a powerful, corrupt leader, somewhere I found that. I can’t find it again, so that just kind of came to mind with everything going on with the World today. “

Headfirst Into Hell is a song that Frank wrote with bassist Dagna Selesia, who played in Warrel Dane’s solo band, and also Ghost Ship Octavious. They began collaborating in 2017 on the song, “it’s a little different element than the normal Beltfed because she had some contribution in writing, she wrote the verse riff, the chorus riff and one of the solo riffs. So, it’s a little different than the solo stuff than I write.”

Frank then reached out to Tim Aymar who did vocals in the band founded by Chuck Schuldiner, called Control Denied and is currently the band, Hellios. The song is about addiction, however, it’s on the other end of the spectrum when you’re dealing with a Loved one going through it, “it’s pretty tough to deal with when someone has to go through it. It was a good topic that I wanted to put in there because I’m sure people can relate to that. There’s a lot of people that have had to deal with a lot of Loved ones going through that, and it’s not easy. Tim thought it was a good concept and he liked it, I just let him kind of write the lyrics and do his thing. I’m very happy with what he did. Everybody on this song and the album, has been very easy to work with, it’s a lot to orchestrate when you have this many Musicians on five songs,” Frank said while laughing.

One of the songs that has yet to be released from the EP is called Accept Your Insanity, and is one of Frank’s favorite songs he’s ever written, “the way it all came together, I wrote it in like four days. Usually, it takes me longer to structure out a song than four days, but this one just flowed really good, and came together, and I just Loved the riffs and how it all played out. It was really cool, and Jeff Loomis did a solo on that one as well. And it’s a pretty epic solo actually, it’s a minute long solo section. And he was like, “damn, dude, you gave me a minute long here? I’m going to have to really, write a story here!” He spent a lot of time on it, I owe a huge thanks to him for everything that he’s ever done for me, personally and in Beltfed Weapon, and this song definitely is pretty epic as far as the solo goes, and the rest of it too, I think. I’m very proud of it, for sure.”

John ‘JD’ DeServio from Black Label Society is also featured on bass in the song Accept Your Insanity. Frank says it was thanks to his friend Andy Beech who used to tech for Zakk Wylde and introduced him to JD. “I reached out to Andy and I asked him if he could hook me up, introduce me to JD, and JD heard the song, and he liked the song, I guess he was a little challenged by it because he normally doesn’t play Thrash Metal, but he did a great job.”

Another unreleased track is titled, Killing Machine, and it’s more along the lines of Death Metal, especially with Steve Tucker from Morbid Angel on vocals. “One particular riff on that song is probably the hardest riff I’ve ever written in my Life, as far as the endurance to play that, it’s even harder than Mind Rape, and there’s a little more Morbid Angel influence on the chorus riff in that song. I knew Steve Tucker would be the perfect guy for that after knowing that he wanted to be involved.”

Darkened Demise is a Thrash-Death Metal song and also features Steve Tucker on vocals, “I think it’s really good, I’m really happy with how it turned out, I just kind of gave Steve a concept of what I was thinking about, kind of jotted down some words and he kind of tweaked everything around to work for him, and yeah, he did a great job, he liked what was going on, it’s pretty cool.”

Jason Viebrooks from Exhorder is also featured on this song, as well as on two others, “he brought Steve Tucker into this, he’s done a lot for Beltfed, and has had a lot of good advice for me for this process.”

Eternal Fire is another unreleased track and is one where Jeff Loomis and Kragen Lum collaborated on for the solo. Frank tried to make each song sound different, not just with the vocals and the different lineups, but how he wrote the riffs and the Music as well, “It definitely makes it that each song has its own individual thing going on, which is really cool.” The song also features Bryan Newbury, who played drums on all five tracks. Tim Roth from Into Eternity introduced Frank to Bryan, “he introduced me to Bryan Newbury, and wanted to be a part of the band, working out each part, structuring his drumming, and made it so complete I couldn’t ask for a better job than what Bryan did on the drums, that definitely changed the whole dynamics of the EP.”

All of the songs on

Darkened Demise were mixed and mastered by Juan Urtega, who has worked on albums for Machine Head, Testament, Cattle Decapitation, and more!

You can purchase and support Beltfed Weapon by heading over to their official website in the link below the video. All of the proceeds made goes right back into the project, “I’m excited to be able to keep moving forward and keep some momentum going.”