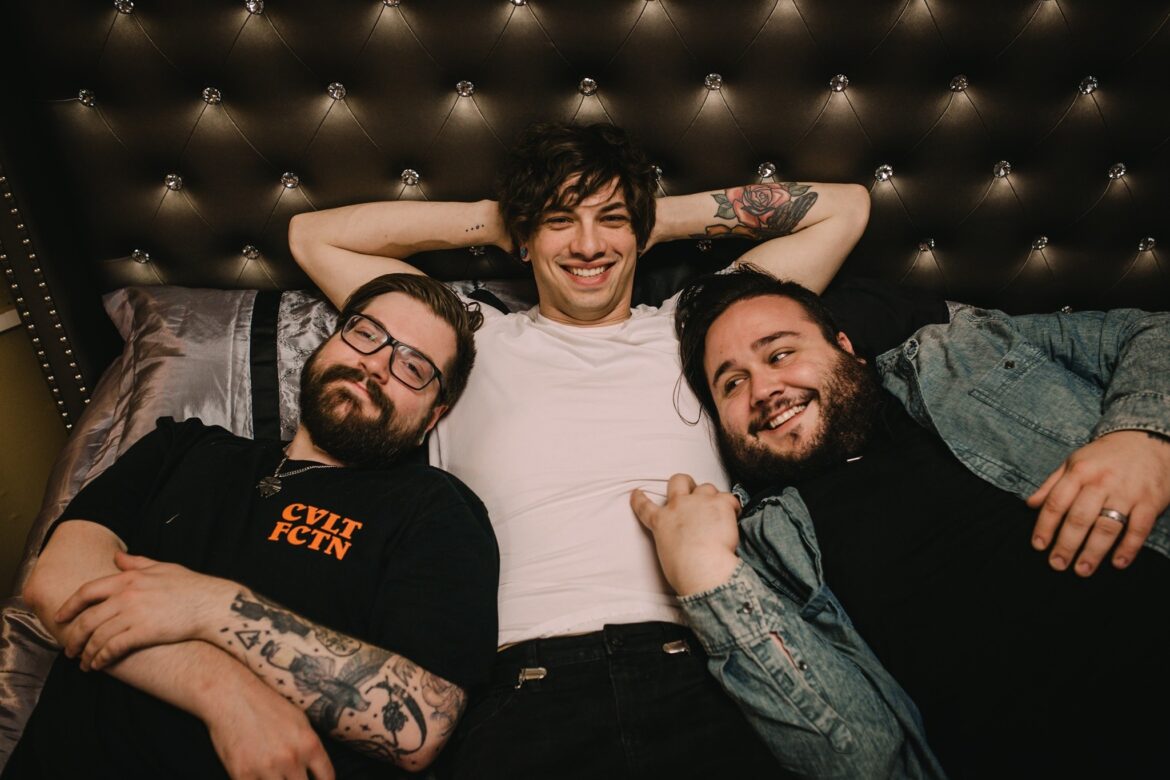 Archers are a band who formed in Madison, Wisconsin in the mid 2010’s by guitarist Ben Koehler and vocalist Nathanael Pulley. Their first EP CUTS&Bruises was released in December of 2020, followed by their most recent New Normal, which dropped in July of 2021. The band is currently working on releasing a series of singles rather than an EP or album at the moment so they can focus as much energy as possible on each track. Their name Archers comes from their previous band Ben and Nathanael were in called Archers and Illuminators when they were signed to a Christian record label. They decided that route wasn’t for them.

Ben elaborated about the experience in our interview, which you can listen to the full un-cut audio above. “We ended up writing this record that was ‘maybe this isn’t us, exactly, and like maybe a lot of Mental Health issues that we’ve been struggling with throughout our teens and early twenties, maybe it stems from this not actually being us, not being where we want to be or who we want to be…We just kind of formed that way. And then the label ended up going under between when we finished recording it and when we got our final mixes back. Then we ended up buying our record back from them, but then part of the deal was that we couldn’t end up keeping our own name and that’s how Archers ended up starting.”

The band is comprised of three members, Ben, Nathanael, and Oscar, who is the bassist. They bring in a live drummer when needed, “The three of us just mesh so well together. The three of us feel like a group of brothers at this point. We definitely bicker and fight with each other like crazy, but we really get along well together, and we have a really good chemistry that really shows in every aspect of whatever type of content we’re pushing out, whether it’s a goofy Tiktok video or us being on stage, writing, recording Music in the studio, I feel like it all kind of shows through everything we do. It’s just the three of us, we have a live drummer, which we bring out as needed for shows.”

Archers have been featured many times on That Space Zebra Show, from Battle For The Big Stage to the Blackcraft Unsigned Bands Chart, where they currently sit at the #2 spot with their new single, Bitter. When you stay on the charts for more than 6 weeks, you get a spot at one of the DWP festivals. Archers are set to perform at Louder Than Life in Louisville, Kentucky on the DWPresents Stage on Thursday, September 22nd!

“Those guys are so sweet and they’re so nice. When we did Battle For The Big Stage, we ended up having to drop off because we didn’t realize there was going to be a livestream part of the contest and our vocalist was out working a tour he was driving for a band at that point. Even with having to manually drop off, we still notice a huge increase in our overall listeners and audience engagement from being a part of that contest and then also being able to make friends with those guys has also been like a huge help as well too, they’ve been really supportive of us and really kind and awesome, great all around dudes.”

Ben continued on about how they found out about Space Zebra, “Initially, I was scrolling through Facebook one day and I saw an ad where it was like, “does your unsigned band want to tour with Escape The Fate?” I was like, “I guess…Probably” [laughs] It was like, fill out this Google form! And I was like ‘ok!’ And then I filled out this Google form and I forgot about it, and then a month later, I got an e-mail saying “you’ve been selected to be part of the Space Zebra contest, and if you win, you’ll get a tour with Escape The Fate, you’ll get to play a giant festival and I was like “huh?! what?!” So, honestly it just kind of happened when I saw one of their ads…And then a month later we were in go mode.

Honestly, figure out how to submit, look for those forms. If you watch the streams, they’ll post them in the comments and chat; how to actually fill out the forms and submit for them. And then push it as hard as you can. Get every single person you know and try to see if everyone you know can get everyone they know and just keep spreading the word and show up and interact with you and engage with you while you’re actually in the contest, the better you wind up doing, the better response you get from those guys too.

If you’re listening to this and you’re an unsigned band trying to get more exposure and trying to play major festivals, trying to grow your fan base overall, the Space Zebra — DWP Twitch Channel is the way to do it right now. It’s such a way to grow such a huge organic following in such a short period of time too. Like, literally the only thing you need to do is just have content to post in there and be engaging and be active in it.”

Are you in an unsigned band, or a band on a very obscure record label? Sign up for the Danny Wimmer Presents Twitch band competitions here and also submit to the Blackcraft Unsigned Band Charts here!

You can buy FEE FREE tickets to both Louder Than Life and Aftershock at BlackcraftTickets.com!

Ben chatted about the differences between being signed and also being an unsigned ‘DIY Artist’, “It’s almost like the work you put in, it’s more challenging, but you physically see the results happening in real time. So, it’s like there’s good and bad to it. I feel like…The band in our position, we’re our own booking agent, we’re our own manager, we’re our own publicist, we’re our own marketing team and it’s definitely challenging to take on all of those roles and figure out how to be able to do them to beyond the best of our ability. But then as we get results from them and we actually see our fan base grow, it almost feels like more rewarding. Like, I’m sure if we had a master team behind us, seeing this all happen would also be rewarding and also be really fulfilling and also be really great, but I think there’s something special in being able to just like ‘yep, we’re building this ourselves’ and it’s nuts to see.”

When we got onto the subject of their New Normal EP, Ben talked about the Mental Health aspect, “it kind of stems from realizing even if you’re not ok with yourself, there’s still a place for you, and you don’t necessarily need to…kind of getting over this feeling of like I have to be this perfect person, and I have to be this amazing beacon of shining light in order to actually to have any type of platform and realizing there’s still space for us to be able to be individuals and be a band with realizing that we’re not completely ok and we’re not perfect.

I feel like the area I grew up in …I had really Loving, caring parents where like if I wanted to talk about something going on inside my head or talk about how I’m feeling, they were happy to listen and happy to talk freely with me, but I felt like growing up, once I left my home, once I got into school, once I got in my friend’s group, something bothering you, that’s a you problem and you just need to suck it up and deal with it, it was kind of the vibe going on that I was growing up. And I feel like that’s slowly changing and I feel like there’s been a lot of resistance from it, and I feel like a lot of the push back on wanting to actually acknowledge Mental Health, and deal and how people deal with Mental Health issues are people, older generations of people who have Mental Health issues, and they were like, “Well I sucked it up and dealt with it, and now I’m miserable and depressed, so why can’t everyone be miserable and depressed like me?” It’s like, “well, or they could just not be, and we could actually deal with what’s going on inside of ourselves”.

We also chatted about their Lo-Fi remix of their song, Shallow, which is completely instrumental in comparison to their original version, “We did the Lo-Fi remix of Shallow just because it’s a song that the three of us like from our last EP, and initially we wanted to do a Music video for that song and decided to scrap the idea of doing a Music video and focus on doing a new cover and single instead… We still wanted to give some Love to that song.”

When Ben was asked about the concept of the visualizer for the Shallow Lo-Fi Remix, “Really what that was, we reached out to an Artist, we were like ‘hey, we want to have something home grown, can you listen to the song, look through our socials, kind of use these colors as the main colors around the image and see what you come up with and when you send it back, can you send it back in this format so that way we can send it to someone who does video work and have it somewhat animated or a very, mild motion effects going on throughout the video.” 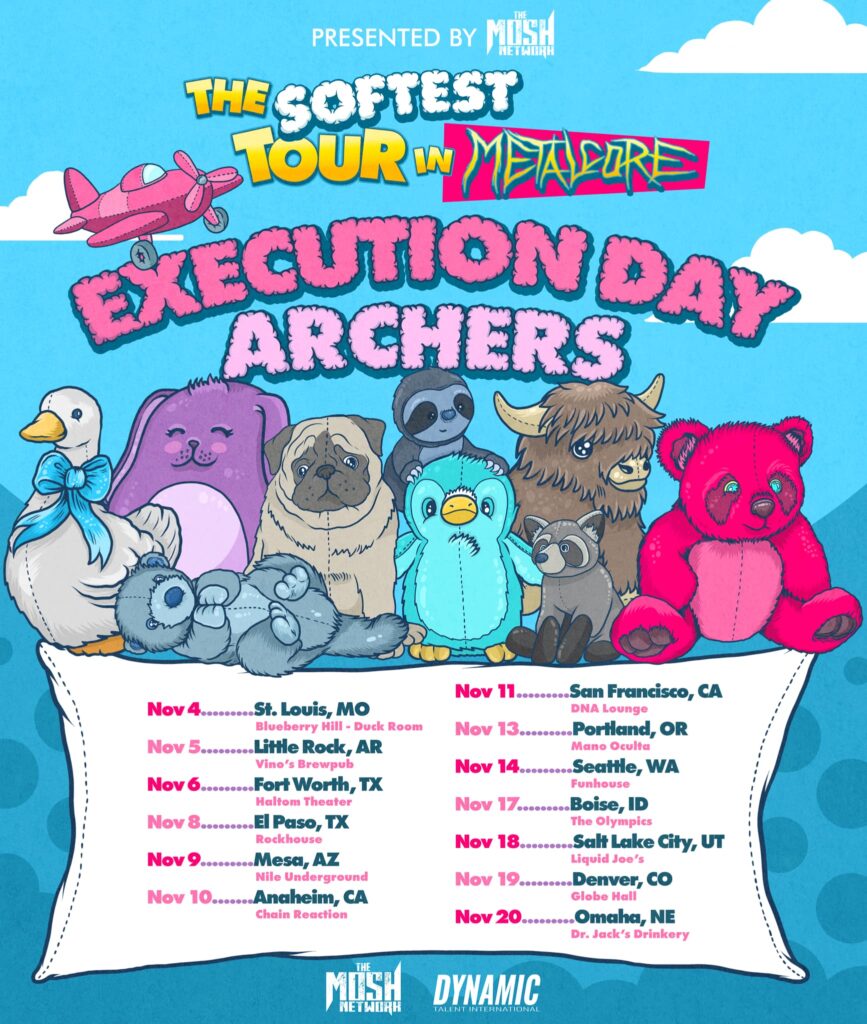 You can catch Archers on tour this Fall with Execution Day on The Softest Tour In Metalcore, which begins in St. Louis, Missouri at Blueberry Hill on November 4th, and ends on November 20th in Omaha, Nebraska at Dr. Jack’s Drinkery! 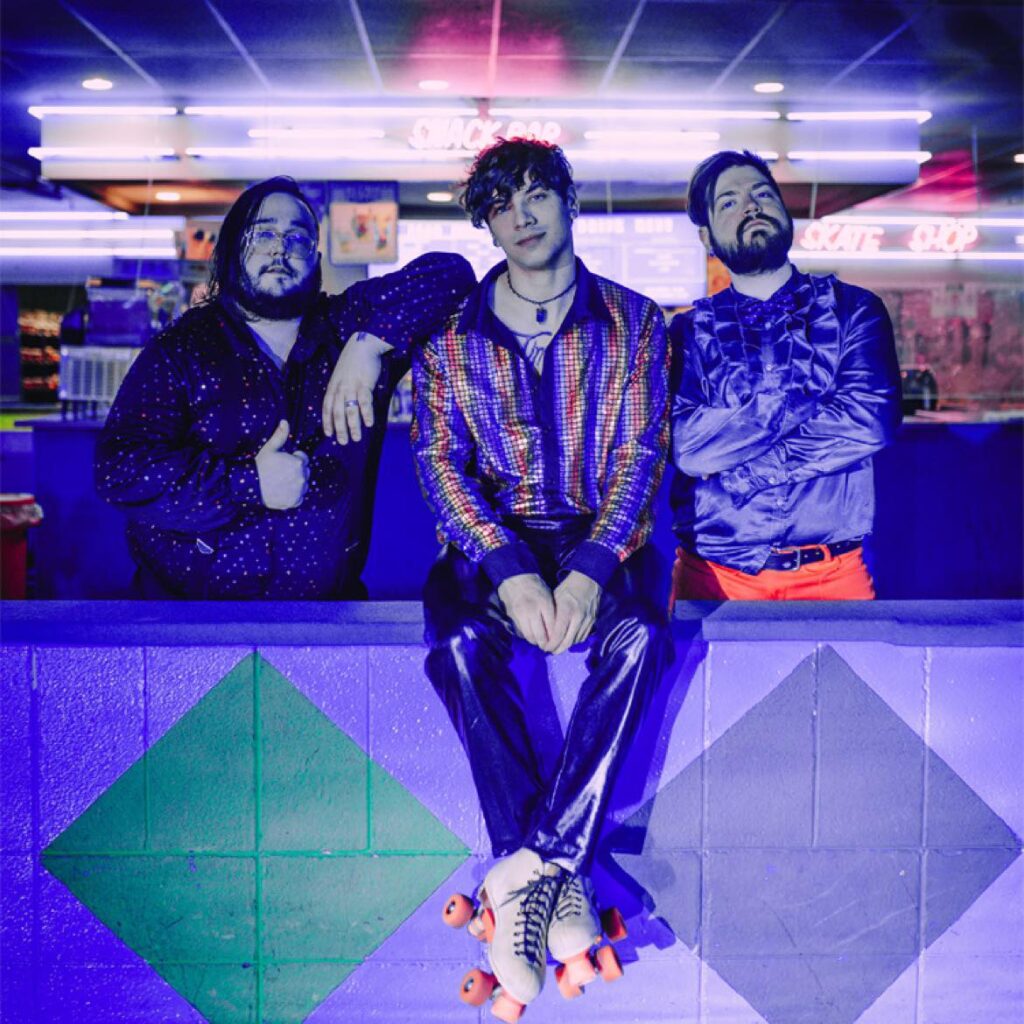