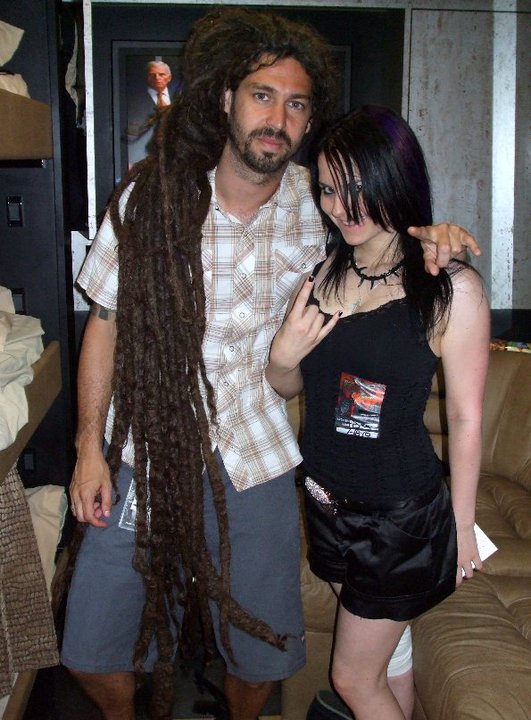 How has the Mayhem Fest been going so far?

Ah, it’s been great, we’re five or six shows in and the crowds every day have been insane, even through brutal heat and things like that, which amazes me because I mean, it’s tough for us to go out there for a half hour and they’re standing out there for five-six hours without any shade. It’s been amazing, it’s a killer lineup, bunch of great bands, and it’s run super smooth, non-stop music; that’s what I love about it — there’s no set changes between the two stages, it’s just constantly. Today, unfortunately, no motocross-like-dudes because they don’t have a place to set up, but there’s been that every day. So, it’s crazy, you know.

I didn’t know that.

Yeah, Metal Mulisha is out here jumping, but today there’s no place to do it because there’s not the room; they wouldn’t let them do it on the street.

Are you guys working on a new album?

You know, we’re just going to be touring until the end of this run and then probably heading home for a little bit with some time off and then start working on it. I can’t imagine us not really getting down to doing anything until early next year. By the end of the year, we’ll start writing some stuff; start like demos in early 2011.

I heard that Matt is doing a side project?

Yeah, actually Matt and Jon have a little — it’s like, like a– it’s still kind of metal, it’s a little more on the rock side, and a lot less thrashy, it would probably be a little too rock ‘n roll for the Shadows Fall stuff, but they’re working with Derek from Unearth on drums, and they’re just looking for a singer right now.

I’ve been reading a bunch of rumors saying that this new side project may be the end of Shadows Fall, can you clarify that for me?

I doubt it. Yeah, they’ve been working on this for a little while so — everyone always has side projects. How do you feel the internet over the last five years or so with social networking has affected heavy metal in general?

Well, it’s been good and bad. Things like Twitter and Facebook allows you to keep people updated. Like, we put up our signing times every day and our set times, and all of that. And also, just keeping random photos and keeping them interested with what’s going on with the tour. Bad side is that everyone can just steal music and things like that, so record sales have been really diminished, and it makes it a lot harder for a label to be able to front money to a band to make new records and go on the road, and things like that. So, it’s kind of a double-edged sword. Bands are getting probably more exposure than they would’ve had, but unfortunately they’re making less money because of it. It kind of sucks, it’s kind of a weird thing.

Yeah, that’s what I’ve noticed, heavy metal artists are rank high on the Billboards, but then their following CD is a lot lower.

Yeah, well even sometimes you’ll be — we actually charted higher on our last record than the one before it, the one before it actually sold more copies because all of the numbers are just dropping. Every year it’s dropping like, 20-30% across the board on the record sales. It’s pretty crazy. So, something’s going to have to change the whole way things are done at some point. CDs are probably just going to get phased out.

Yeah, going to all mp3’s pretty much.

You guys have a DVD coming out?

We don’t know the release date yet, but we’re hoping for the end of October, but we just found a bunch of other footage that we’re actually trying to include now. So, it was shot live in the Phillipines, in Manilla. It was a big festival, you know, like huge show, multi cameras, all that stuff. So, and then there should be like a whole other bonus thing. We did a trip to Korea, we want to include some of that and a few other things, so trying to get it all together to come out hopefully in October at the latest, but we‘ll see what happens. Maybe a little sooner.

How do you feel the camera captured your stage presence and energy?

You know, it does what it can do, you’re never going to really be able to get all of the energy of a live show, which is also what the internet can’t steal, you can’t steal the live experience, but at least you can — it’s a way to showcase what we’re all about on stage. So, it’s a real cool set list of mixes and stuff, it was the first time we had ever played War, it was the first time we’d ever played Public Execution, but also we played stuff from the first album too. So, it was kind of a cool set list that way and just, we had tons of pyro and explosions and all of that stuff, so it’s definitely cool, it came out pretty cool.

What is one of the major things you’ve seen change with your touring habits since you’ve been with Shadows Fall?

Well, you know, we started out in the van, and you know, just five of us with one other person, you know, doing it super like budget/DIY style, to the point you’re on a bus. This tour, we’re actually pretty stripped down, we didn’t bring much of a crew; we’re doing a lot of stuff ourselves. A lot of that has to do with again, just the fact you want to package up a bunch of bands because people don’t have a lot of money right now, so you want to be able to give more bands for the price of a ticket. Unfortunately, that means you split what you make a little bit less, but gas prices are going up. So, (laughs) we’re looking for other ways to try to keep it financially, you know, where you can maintain it, you know, like– it’s definitely tough. It’s worth it to try and make these shows that much better for people to be able to come out and spend money. People can’t spend money to see a million bands a month, you know? You just can’t afford it these days. That’s what’s great about these package tours, it’s just eleven amazing bands for the price of one show. Which band are you or were you looking forward most to seeing?

You know, Lamb of God and Hatebreed are my favorite live bands, we’ve obviously toured with each band probably ten times each, I’ve seen them a lot. But it’s cool. And also, Rob Zombie puts on a pretty serious show, he’s got a lot of crazy video screens and all that stuff, he keeps adding to it too. Yeah, so that’s cool to watch.

Before you started the Mayhem Fest, was there anything you were excited about doing that you didn’t do on any previous tour?

You know, we were actually just looking forward to getting back on a summer festival tour. We’ve done a few Ozzfest’s and things like that, and it’s been a while. These are probably the most fun tours, not only do you have your friends around, the crowds are huge, and very mixed as well. You get in front of a lot of new people, so for us, it was more about getting back to that kind of environment. We’ve been doing — we did three great tours with Five Finger Death Punch, doing club and theater shows, and that was great, but it’s good to be able to get back out to heavy metal summer camp again.

Well, we came off the road in 2006, it took us about a year to get Threads of Life written and done. Then, we went out for another straight year though, then took another six months to get the new record out. The War Within “era” was–did last like three years though, we were on the road insanely, though. Yeah, we can’t keep up the pace we used to. (laughs) Enjoying time at home too much these days, you know. (laughs) I used to hear you guys ALL over the media and I don’t know, it seems like heavy metal has kind of, I don’t want to say dying down, but had gotten very popular, and now it’s—

Yeah… That’s what’s going to happen with anything, you know. Once it tries to get too big, then there’s just too many bands, and then everyone’s trying to do the same thing, and just gets over saturated, you know? We’ve been doing it for over fifteen years though. We’ll always be around! (laughs)

Cool, a lot of the people on this bus right now are vegans, a lot of the Winds of Plague guys are vegan. It’s been pretty easy on this tour actually, because there’s catering, and they always have a vegan/vegetarian option every day. When you’re just kind of — we just did South America, that was not as easy. (laughs) They didn’t really uh…They don’t really embrace the vegetarian idea too much down there. You can always find a way, but we definitely had to do a little work.

Yeah, I’ve heard from so many people that they say that it is hard to be vegan/vegetarian while touring or on the road…

Yeah, it can be especially when you’re, like if you’re in a van, it’s very tough because you don’t have a refrigerator to at least stock up at a grocery store and some stuff, and trying to find late night food that works is pretty tough. But once you’re in a bus, you at least have some options of you know, microwave and refrigerator; then a tour like this, there’s catering. But, it can be tough; there’s always a way though.

Have you done any recent work with Peta?

You know, not really, for me, Peta has always been a way for me to express my ideas. I’m not a huge fan of the organization as a whole. Just, any time somebody becomes that much of a political organization, it starts to have an agenda, you know, outside of what it started as, so it’s kind of tough to speak for them when I don’t know everything about them. But, I’ll always do an interview with them to at least express my ideas and spread the word about how I feel. For me, vegetarianism is a very personal thing, it’s hard to force it on someone, you just get more of a negative reaction than anything else. If you don’t embrace it personally, you’re not going to be able to really do it anyway.