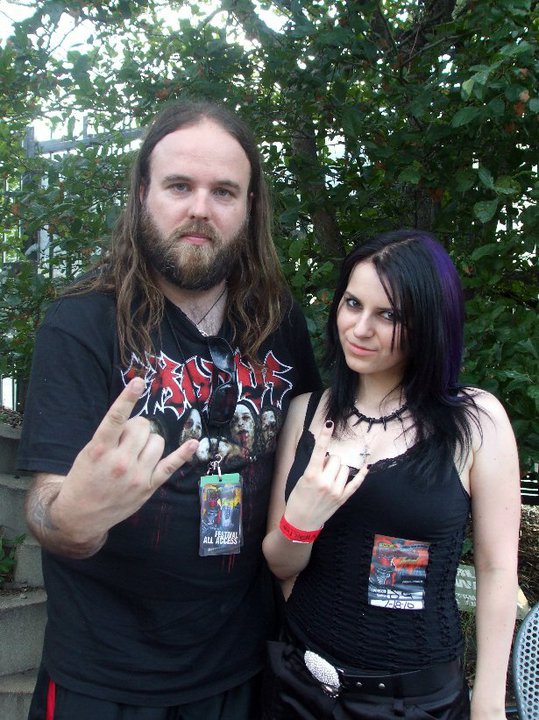 How has the Mayhem Fest been going for you so far?

Pretty well. It’s still early, but everyone is having fun, trying to get used to the hot weather. This is a little bit of a relief, I guess, compared to the last couple of days. Aside from that, the shows have been really good, playing in front of a lot of people is always fun, so I like that.

Will there be a follow up album to your most recent release, Here Waits Thy Doom?

Yeah, eventually. We’re still working on promoting the last one because it hasn’t even been out for a year yet, so we’ve got a little ways to go before we’re thinking about putting something new out. The latest one just got re-released, actually earlier this month with extra tracks and that kind of thing. It’s almost like renewing the promotional cycle. (laughs) It’ll be a little while, as soon as we break, we’ll write some new stuff.

Do you have any ideas yet for the next album?

Yeah, we haven’t sat down and like, showed them to each other, but I always take notes here and there when I think of a good idea, I’ll just put it in my notepad on my phone; and the other guys have riffs that they’re writing, but none that I’ve heard from them yet. We’ve just been too busy out here. When we are at home, we’re usually rehearsing a setlist for the next tour, so there’s not a lot of time– there hasn’t been any time to write yet.

You write mainly the lyrics, right?

Yeah, I don’t write any music.

What do you think is the most meaningful lyric you’ve ever written?

Well… (pauses) Let’s see… (pauses) I guess Deadly Sinners was kind of a popular song for us, so the lyric “enemies of metal, your death is our reward” is kind of one that kids will like, rehash and shout at us, and put comments on Facebook and that kind of thing. So, I guess that one because that’s probably the one song that people know us most for.

When you are writing your lyrics, do they come to you? How do they start to materialize in your mind?

Even though your last album sold more copies than Here Waits Thy Doom, do you think your newest one was more successful, in a sense? Because you hear things like Pantera’s The Great Southern Trendkill, it didn’t as many copies as previous albums, but several people say it’s their favorite album of all time.

Right. Yeah, well… In a lot of ways, I think some fans and some media who weren’t– didn’t really take us seriously before, kind of take us more seriously now. So, in that sense it’s more successful, especially over in Europe where, you know, they’re really die-hard about it. (laughs) They kind of didn’t know what to think of us, a lot of press were kind of–thought that we’ve come into our own now with this record.

I’m not bothered by the sales being lower, I guess that’s just a sign of the times; everybody’s sales are going to be lower in general, unless we come up with some sort of radio hit, which I don’t foresee that. (laughs)

You guys were considered, by some people, to be a “joke band” and now that people are starting to take you seriously–

Yeah. People thought we were a parody, we were making fun of metal, and that was never the case, and it was frustrating. Some people still think it’s a parody of sorts, but not as many. I think we’ve come a long way.

It must feel accomplishing.

It is, especially like, what I mentioned in the last question about how people were just starting to take it more seriously and so, that’s very gratifying that people get it now.

Not really because we’ve always stood out on any tour we’ve been on. So, we’re not going to change how we do things, how we play songs, just to accommodate another band’s fan base. We want to draw people on based on what we’re already doing, so we’re not going to compromise in that sense.

You’re the only original member in 3 Inches of Blood, you’ve had several lineup changes in the past, how do you feel the lineup has been holding up lately?

Yeah, you know it happens. It’s always been– the last little while has been stable. Some people just aren’t cut out for it, they move on to do other things. We’re more particular and careful about the people that we want to play with each time just in case the unthinkable would happen, you know?

Did you find it difficult when all of the lineup changes were happening?

At first, yeah. None of us who have been at this for this long have ever deterred. We’re more focused on– ok, well, they don’t want to do it, fine. Let’s push them aside, that’s the past, lets move on and play with people who want to jam this music.

How would you say your sound has evolved since you’ve been playing with 3 Inches of Blood?

Hmmm. Well, it’s stayed– the whole–what’s the word I’m looking for, like the spirit of it has always been the same. There’s been a same foundation going on. Any kind of evolution just kind of happens without us really thinking about it. I mean, we don’t want to repeat ourselves, but I think we’ve been pretty good at maintaining somewhat of a sound of our own. Any progression or any evolution has kind of been a natural progress, I guess. Nothing we’ve attempted to do, you know? It just kind of happens.

What do you believe is one of the most important things that 3 Inches of Blood has accomplished since day one?

Well, since I’ve joined the band, I never thought I’d be going out on tour and playing around the country and around the world, that sort of thing. Just that, being able to go on tour and travel has been like, kind of the big accomplishment for me overall. We’ve had lots of little successes that have been like, milestones in a way. Like, we got to open up for Iron Maiden, we got to go to Europe now a few times; we’re going to Japan later this year for the first time. So that’s another one that– since we have been making like a serious career out of it. We’ve had this little mental checklist, I guess. Being able to play in front of other people, that’s really what it all boils down to, is being able to get your music out to other people, and doing it outside of my hometown. That’s kind of– it just started from there. We just kind of think about our goals in our head and stuff we want to do. We don’t take it for granted, we appreciate what we got. We’ll do it for as long as we can, so we’ll just appreciate it for as long as we can.

I’m sure you get told this all the time, that you have an incredible voice.

How do you take care of it?

Hmm-hmm. (Pauses) I don’t do anything in particular, really. I’ve never had lessons. I try to avoid being hung over on the day of a show, and I use my own microphone. That’s kind of a key, I’ve noticed that I’ve been getting sick a lot less than when I use my own mic because a lot of people will use the house mics in a lot of venues they’ll play, and some people don’t clean them very well. So, I learned that very early on. But, some people have techniques they do. I don’t really have any–just kind of do it. As long as I have a bottle of cold water with me, I’m usually ok because being hydrated is pretty important. My throat can dry out.

Those are all of my questions, would you like to say anything else?

Thank you for reading. Thanks to everyone for supporting us. (laughs) Kind of clichè! (laughs)