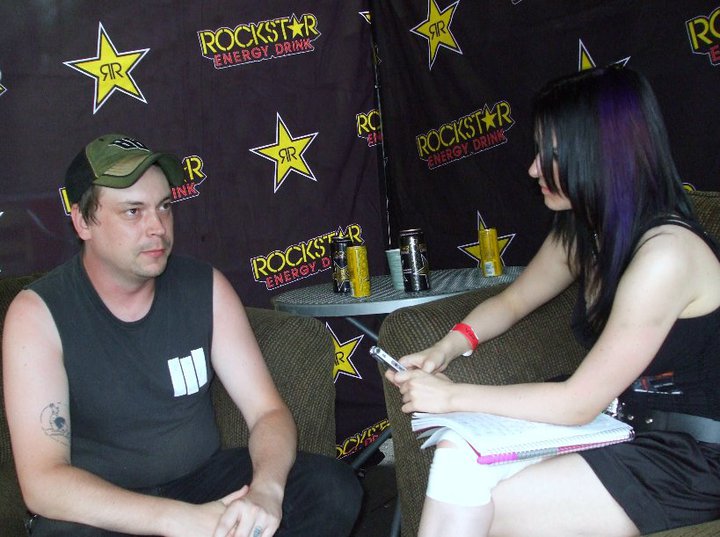 How has the Mayhem Fest been for you so far?

It’s been awesome. It’s exceeded our expectations so far. We’re kind of one of those bands that can mesh well with this kind of crowd and the Warped Tour crowd, so you never know what to expect. (laughs) But, it’s been awesome. The response has been cool, we’ve got our new record out on this tour, it came out Tuesday, and we’re selling it pretty good; can’t complain at all!

I was about to ask you about your new album, I cannot pronounce the name though! (laughs)

Meridional, ok! How would you describe the diversity between Meridional and your previous album?

It’s– I think the last album was kind of a little all over the place. We wrote– there were songs that sounded like this, sounded like that, it didn’t really flow good to me. But, there were a couple of like, softer songs on that record that were like– we kind of wanted to do some different kind of vocal styles like, clean singing vocals and stuff. This record, we kind of meshed all of that together in every song, you know? All the songs kind of flow better this time and it’s more aggressive, it’s a little more angsty, kind of pissed off at certain things. (laughs) Overall, it’s just– it’s really kind of going back to like, a few records ago, the way it sounds. It’s really heavy and stuff like that; kind of chaotic.

I remember seeing you in 2005 at the Sounds of the Underground tour, when I was 16 or 17. So, how would you say you guys have evolved as artists since then?

Well, I mean, I feel like we’ve just been, for the most part, kind of challenging ourselves as far as songwriting. Kind of getting more and more mature about it and obviously getting better at our instruments, kind of challenging ourselves. Vocally, our singer, Corey, has stepped out of his box, tried new stuff, and I think it;s working really well for us. We’re really happy at the progression; every record is different for us. We don’t really try to do one certain record, we kind of just write and see what comes out. So, the next record will be– it could be totally different again, I don’t know. (laughs) But yeah, I think the biggest thing is that we challenge ourselves, as far as musicianship, not playing the same old thing all the time and trying to mix it up a little bit.

I know you guys are a Christian band, which I think is so cool.

A lot of people strictly associate heavy metal with Satan, but over the last few years it seems that a lot of artists have come out and said that they are Christians, do you believe that it’s become more “acceptable” to be a Christian and be in metal?

Yeah, I think within the last ten years or so, it’s grown, and we’ve toured with a lot of Christian bands that used to open up for us and now we would open up for them, so it’s like crazy. I think it’s not just the Christian bands, just like the whole community of heavy metal music is kind of more accepting now. And it doesn’t matter like, every band sings what they believe in; 3 Inches of Blood, they like the fantasy thing that they sing about and that’s cool. We don’t necessarily sing about Christianity all the time, but we sing about what we go through in live, just like everybody else does, and we just happen to have the same faith with each other, you know? It’s not anything weird, we like heavy metal and we love the Lord, so it’s just how it goes.

Do you have a favorite book from the Bible?

Hmm! I always loved– I know everyone always says Revelations, but I like it. I just like the pictures in my mind when I’m reading it, you know, it’s like crazy stuff. And I’m like, in my mind, I don’t know what is going– what this is supposed to look like when it happens, but in my mind, I’m just like, “wow, that could be crazy!” Also, John and Joe; I love everything about that kind of stuff. It’s just hard to say. It changes a lot too.

Yeah. Proverbs is one of the things that I try to read as much as possible, ’cause like, one little Proverb could change your day. I used to read a couple Proverbs, a couple Psalms, and then a couple chapters of another book every day. It’s weird how your day could be better if you apply that stuff to your everyday life, you know?

Do you read the Bible every day you’re on tour?

I don’t, I wish I did, but sometimes it’s– I don’t really have an excuse, I can’t say an excuse, I don’t– it’s something you’re supposed to make time for, but I get lazy sometimes. (laughs) I’m not by any means perfect or even really good. (laughs)

Have there ever been any black metal bands who have tried to bother you in any way?

Never had that happen, never. But, there was one instance in Atlanta, where we played with this band, can’t remember their name, but we were playing after them, and they knew we were Christians and stuff. So they started talking to the crowd about, “yeah, this Christian band is up next, they’re going to preach at you, you might as well leave now.” And the funny thing is, is that we don’t do any of that. He was preaching more than we do! And we were like, “dude, you’re the one who is preaching. You’re preaching against preaching!”

(laughs) Yeah, it was like– we didn’t say one word to anyone about anything, I mean, we got to go with the flow, if we feel led to saying anything. That’s one of the only things I can remember ever happening. And actually, there’s a new song on the new record that is kind of about that situation.

Which song is that?

I just remember– well, first of all, I just play guitar, that’s pretty much the extent. The other guy’s write the lyrics and what’s cool is before we were in the studio, before we recorded the vocals, Cory and Scottie, they write all of the lyrics. They’ll tell us what it’s about, we all get into a big conversation about it, how I feel about it, how you feel about it, and the producer’s in there too, and we all kind of get in the same vibe, like, “this song’s about this, you know, there’s an intention behind it.” And as long as everybody knows the vibe, there’s a better feeling about how Cory delivers what he’s talking about. But there are so many times where I’m like, “ok, this song is about this, but I don’t remember which song that was.” But, I’m sorry, I can’t– (laughs) I don’t even know!

(laughs) That’s ok! Before Norma Jean performs, how do you all get ready?

Sometimes we have a stretch routine, we get to do our stretches together, and sometimes we– we always get together and pray and just do that thing, but there’s not really any kind of ritual thing we do; kind of just play, you know? Definitely you got to stretch though, because when you’re headbanging and stuff, you could throw out a muscle or something. (laughs)

You guys have gotten a Grammy nomination before, are you guys hoping for another nomination with Meridional?

Yeah, I hope so! The one that we were nominated for was for O God, The Aftermath, the art work for it, the artist was actually the nominee, he was nominated for our record, because he did the art, you know? But yeah, I hope we get another one! It would be cool, even just to be mentioned is awesome! (laughs)

You guys have said in the past that you want to move away from things like the Warped Tour and do things more targeted towards the Mayhem Fest, why is that?

Yeah, we felt like on this record cycle that was the best thing to do. We’ve done Warped Tour a couple of times and Warped Tour is awesome, we just felt like this summer we wanted to do something a little more “metal” because that’s really where our heart is, in heavy music. The Warped Tour crowd is cool and stuff and we get good a response, but we feel like this record especially can mesh in more with the metal crowd, you know? It is a lot heavier, a little more metal.

Those are all of my questions, would you like to say anything else?

Meridional is out now, it came out July 13th, it’s heavy, it’s angry, and you won�t be disappointed if you like the older stuff.