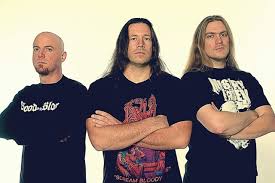 You guys have a new album coming out soon, what’s going on with that?

John Gallagher: Right now, we’re in the process of recording our new album. We came out here to do this one fest, then we’re right back in it. We have the guitars and drums done, when we get back we’re gonna do the vocals, bass, and the mix down. Yeah, it’s sounding killer so far, really intense, brutal shit. I think all the fans are going to like it when they hear it, it’s gonna be released in September on Relapse Records. It’s called Descend into Depravity.

Are there going to be any collaborations on it?

Trey Williams and Sean Beasley: No.

Ok. Are there any current political events that have been incorporated into your new album?

Sean: Definitely the economy, it’s definitely a part of it. No doubt about that. And, yeah there’s definitely some of that and plenty political and violent themes, of course.

Give me an example…Say a line from one of your lyrics.

Yeah, or scream a line!

Sean: Say a line?! You want me to scream a line?! (laughs) …I don’t want to scare my co-workers here. (laughs)

Trey: You can go right ahead.

Sean: How about… Your treachery will die with you.

That works! What will your supporters expect that may be different with the guitars, vocals, etc, than your previous albums?

John: It’s a little crunchier — the reason, a different head this time, an angle head, Savage mixed with the Ampeg vh140C blending it together. In the past, we’ve used the Ampeg, but not this angle. But with that head, yeah it’s brought a better sound, crunchier —

Sean: It’s a good blend, you get the best of both worlds it seems like, with the crunch.

Sean: Plus the tone.

John: We’re working at a very good studio, at Wrightway Studios. This guy has his shit together, he’s really in tune with tones and sounds and everything. So, the production is going to be better.

Trey: Yeah, than what people have heard in the past.

Is there going to be anything different with the vocals?

John: Not really a change, maybe a little brutal, hopefully a little deeper. We’ve been touring a lot; they feel pretty good. So, if anything, they’ll be a little more brutal, or something. But you know, generally it’s the same, it’s not like we’re going to start singing, or rapping, or bringing an opera singer or something in the mix, or anything. (laughs) But you know, people have tried to do that and it generally doesn’t work, when it comes to death metal vocals, you want to keep them brutal, deep, or sick, if they’re high pitch or whatever, and that’s it.

How would you say you’ve grown as artists since your previous albums?

Sean: I guess the biggest thing would be different drummer. Trey’s our drummer now so it’s– that’ll be the immediate thing. It’s a different style of drums, every drummer has a different style. So, right off the bat, I think that will be the biggest difference I guess. Besides that, I guess, we have more technical parts, more (inaudible); less the medium speed of the deal, but–

Do you guys have your album art figured out yet?

Sean:That’s being worked out right now.

John: We have the concept working out with Relapse, the same guy that’s done the last record, so yeah, he’s working at it, it’s going to be –

Sean: Concepts are together, but we haven’t seen anything yet. Like I said, we’re in the studio right now, so that usually is worked out around the same time we start mixing and all the recordings are done, and you start getting a lot of the artwork approved or disapproved; certain things. So, that’s the phase right now.

Could you give a hint of what it could turn out to be like?

Sean: Well, we haven’t seen it yet, it’s not like we can give you a hint of any of the artwork… The themes are there, but we don’t know what it’s going to look like.

John: It’s in it’s early stages, it’s not really complete at all, it’s just concept. It’s usually how it starts, you know, it starts with the concept and then they work with it, and that’s where it is right now.

Sean: It’s always something to try to make you think you know, just like the lyrics. Artwork – we’ll see where we go, once we see the first drafts. — It’s basically us not answering your question! (laughs)

Sean: Is that a non-answer? It was a good non-answer, right? (laughs)

Trey: You should be a politician, man! (laughs)

John: Dance around the issue! (laughs)

(laughs) Well, can you tell me what one of the themes are, at least?

Sean: One of the themes? Well, definitely we’ve got a betrayal theme, which will be pretty brutal. We’re waiting to see how that’ll turn out. We gave them something specific, but I won’t say it until we see it.

Ok, when will you guys see it?

Sean: Probably in another couple weeks after we finish trackin’ and it gets down to the time when we’re mixin’. (laughs) It’s like another non-answer!

How do each of you feel that death metal in general has grown since you’ve been a part of Dying Fetus?

John: Generally, what I’ve seen, it’s gotten faster. Vocals are kinda still the same and the riffs, someday it got a little more technical, but that stuff was even going on back then, you know? Production value has gotten better, that’s what I’ve seen. Different hair cuts now.

John: (Continues) And I’m not saying that in a bad way, it’s just, it is what it is, you know, style changes, but the music hasn’t really changed all that much.

Sean: Same thing, definitely the speed is the bigger difference between years ago and now, see now grind bands are pushing it farther and farther and seems like a lot of bands want to be the fastest. That happens a lot though. You can only play so fast when people can still understand what you’re doing. And then you push it beyond a certain point so, then a lot of bands start get more technical it seems like, once they drain the speed. (laughs)

Trey: Well, it’s only been two years for me, a little under two years. So, I haven’t seen a long list of stuff change, but I mean, I’ve been a fan of death metal, of course and the thing I’ve noticed is that it’s more acceptable, in ways now. There are elements of extreme metal making its way into more mainstream styles of music. You’ve got bands like Slipknot, now I’m going to use them as an example, basically letting people get their feet wet, and teasing them with little extremity and if they decide go that way and further into it, well there’s bands like us around. I’ve also notice a lot more kids. There are a lot more kids coming out of the woodwork and they’ve gone to their music lessons and they’re pretty damn good. The best example I guess, would probably be Australia; we just got back from. There was not a single slack band as an opening band down there. All the local acts down there pretty much had their shit together; they were well rehearsed, and young, and very impressive, very impressive. So, I guess I’ll say, because it’s gotten a bit more acceptable, it’s being embraced more by a younger generation.

Do you guys find it sometimes challenging to be a three person band, rather than a four or five person band?

Sean: No, it’s easier. Basically, another person you add is another person to be tight with, too. That’s of course, in music, the hardest part; to try to play tight every night and every person, like bands that have a lot more people, it’s harder to play tighter. Each person has to lock in with everyone else, and as three people, it’s a lot easier. It’s definitely, I think easier.

Sean: Yeah, and there’s only three of us, you know, you so make a decision (inaudible)– and there’s not a production meeting either, we’re all standing right here! (laughs)

In each of your opinions, who would you say has the best death metal voice of all time, besides you, yourselves. (laughs)

Sean: (laughs) Ask that for John.

John: It’s hard to say. I’ve always liked John Tardy of Obituary, he was probably the most extreme guy, back in the day, and doing this crazy shit (mimics a death metal vocal), so yeah, I don’t know, I’ll probably have to say him. What would you say, Sean?

Sean: I don’t know, I’d have to break it down in the aspects of how you know. Like, sick wise, I’d have to say Obituary, powerful, I’d say like Corpsegrinder, I mean he’s got the power behind his voice.

John: Right, he’s got the speed and power.

Sean: Yeah, and then you got — yeah, it’s weird, you know? It’s hard to say the best overall.

John: Yeah, Frank Mullen’s [Suffocation] good too, he was a big inspiration.

Sean: Right, then you got the deep vocals; you can pick the best of that, you know. It’s hard to say.

Trey: Alright, this is going to say really cheesy…But…

Trey: (continues) But…This is the little bit of the fan that’s still in me, is John.

Sean: (laughs) She said besides him, Trey.

Trey: Oh, besides him?! Oh shit, man! You know, Frank [Mullen] from Suffo is great, that dude is fuckin’ bad as fuck. He’s a good vocalist, man.

Trey: Yeah, you know… interacts, busts his guts out.

What do you guys plan to bring to the Summer Slaughter Tour this year compared to last year’s?

John: We’re going to bring IT!

Sean: Anything pretty brutal. We got a short set, we’re going to be right in the middle of the package. So, it’ll be killer probably every night, it’s always good with a little short set.

Anything new going on the setlist?

Sean: We’re definitely going to do a new song.