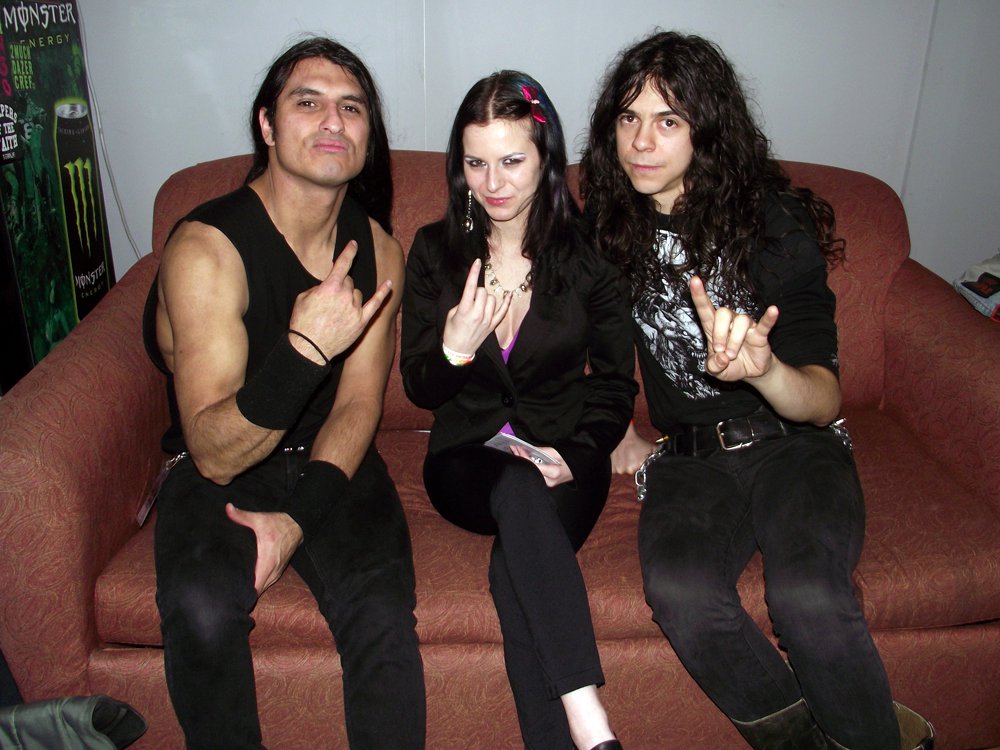 An Interview With James Paul Luna and Eli Santana of Holy Grail!

How has this tour been doing so far?

James Paul Luna: It’s been pretty awesome. We had some troubles getting out the first place, we were supposed to make it to Boise, [Idaho] for the first show, but we broke down on leaving two days early. We tried to get back home and hit it again, but broke down again, our van kept overheating so we ended up missing three shows. [We] met up with 3 Inches of Blood finally in Bloomington, Indiana, and then (laughs) they ended up having van troubles as well. So, they missed shows. So, it was kind of like a– it was kind of like a rough beginning, but we finished it up.

But yeah, it’s been ok, everyone’s been trying to stay healthy in the cold because we Southern California boys aren’t really used to the snow and especially like extreme-like negative eighteen degrees in Canada that we hit.

You guys released Crisis In Utopia as your first full-length album. How did you guys feel you connected to the album while writing it?

James: Umm… The connection, I don’t know, it was just being involved with it daily. (laughs)

Eli Santana: For many months…

James: Yeah. And we– The big thing for me was the lyrics, writing the lyrics for it. That was probably the connection to it, the words your singing. (laughs)

Eli: Yeah, probably for me, it just took so much time and there were so many tribulations that happened throughout the album, so it was kind of like, it was really trying the whole time. So just the fact that it was in stores and done was like this huge victory and was like, “Oh my God, we actually finished it and got done!” There are people who like it, which is kind of amazing!

Yeah, I saw on Kat Von D’s twitter that she loves it.

Eli: Oh, awesome! I did not know that…

James: Yeah, I saw that, she’s friends with Danny Lohner, the guy who produced the album.

You guys are somewhat of a newer band, so how have the struggles been with trying to get to where you are now?

Eli: Yeah, but at the same time there’s so many bands that never get into the van or never get a chance to sleep in a van, and then you get a dressing room. So, I think our time as the band, we’ve been pretty fortunate with how quickly we’ve got onto the road, to actually play a tour for the shows. We’re definitely grateful for that.

Are you guys working on a new album to come out soon?

James: Not at all… I mean, I have some ideas, but we’ve just been rehearsing and touring, and preparing for the tours. That’s really been the main focus, pushing this album for the next one and a half to two years and doing an album after that. We’ve always been like– I have like, riff tapes that I usually drop extra riffs onto every once in a while, or like, vocal parts, or like a chorus and a verse type of thing that I’ll just write a melody for that I’ll just put on a voice recorder or something. But as far as writing for an actual album, none of that has happened yet.

Eli: I have a bunch of stuff that didn’t get onto this last album that I really want to kind of nurture and get onto there [the next album]. It was kind of chaotic [while recording], so we kind of want to get a chance to give a lot of stuff chances. But at the same time we’re kind of seeing the world and doing stuff since that happened, and seeing all of these new bands, and touring with them and learning stuff. So, it might be good to start fresh because maybe that’s like, you know, when we wrote that stuff [Crisis in Utopia], that’s where our heads were at, but we were somewhere completely different after that. So, I guess we’ll see.

How did you guys try to translate your live show energy, if you did at all, onto Crisis in Utopia?

James: I don’t know if we actually went for that. We just tried to make the best album possible (laughs) and write the best songs possible. And just let the engineers go at it with that. Maybe that’s something we should’ve thought about, going live more… I think the next album, we’ll do that.

How do you guys want Holy Grail to grow with metal?

James: How do we want Holy Grail to grow with metal? Umm… Lets see.

Eli: You can think and I’ll go first… I like to think that maybe the next album we’re adding to that and not just kind of just mixing our influences and bringing something new and I’d like to be at the forefront of metal and pushing it in a different direction, so hopefully that would be awesome, without getting too weird, it just doesn’t work for anybody.

James: Agreed. I was just going to say the same.

How do the songs, like with the lyrics, translate to who you are?

James: Well, I guess it translates to experiences we’ve had in the past… Tyler and I’ve like with the lyric writing, feeding off of each other. A lot of, fighting against oppressive forces that control a lot of guys, which kind of proving that we get to take down our oppressors and move on and do our own thing.

Eli: Yeah, I feel the same way. But I only really had input on one song, lyrically.

What about the melodies or the riffs that you write, how do they translate to who you are?

James: It translates to our influenfes deeply, like going from old-school seventies rock to modern death metal and progressive, technical, thrash, kind of across the whole board of metal.

Eli: Yeah, it’s kind of like… I really didn’t like, I mean because I think people might try to put us in this traditional metal and retro thing and I don’t, for myself, when I sit down and try to write our riffs and stuff, I didn’t really want to be thrown into that.

How do you feel Holy Grail’s perception has changed through the eyes of the fans ever since you guys formed as a band?

James: Umm… I think some of the fans that were kind of looking for this ‘traditional’ metal and old thrash revival sound, might have gotten turned off by the production. But all of the ones who are really into the true metal and like metal for the music sense and not as for the, you know, niche market of this traditional revival or thrash revival. They like just flipped out over it. So, it’s been mixed.

How do you guys really think you make your fans feel what Holy Grail is all about?

James: From the reactions I’ve gotten, it’s a high energy, pure essence of metal and they really grab onto that. It’s kind of like a timeless metal, I would say.

Eli: I would agree, it’s like the highlander of metal, is how I feel. Some may disagree, but it’s like… You know if we were a band and we were immortal, it would just kind of pick up on anywhere else. But we would– we draw influences from back then, because essentially we were there.

How do you guys want to grow stronger as a band over the next few years?

James: I think personally, I would work on my technique and be a lot tighter and… I have a lot to learn. I feel like I’m only about half of what my potential could be, if I worked harder.

Eli: I think with just playing all of these shows, we’ve just naturally become tighter as a band and we just start feeling each other and if you spend enough time with each other, you’re going to bond with them, you kind of like finish each other’s sentences and have weird, inside jokes.

What would you want to contribute to metal just in general?

Eli: Me personally, I would like to bring really technical, well-thought-out music but with amazing melodies. Like with timeless melodies you could sit down on a used guitar and sing the song and really connect. I’d like to be like, like the Bob Dylan of metal, like actually be able to execute what we’re doing. So, we’re off to a great start with having an amazing vocalist that sings actual melodies.

James: I think, I just want to achieve good song writing and mixed with insane guitar wizardry and really top notch like technical proficiencies which is really the goal. Good songs but without the mindless “noodling.” Like, everything is tasteful and catchy and it’s really kind of like a familiar sound, and really memorable. And like, some of the people will keep humming time and time again.