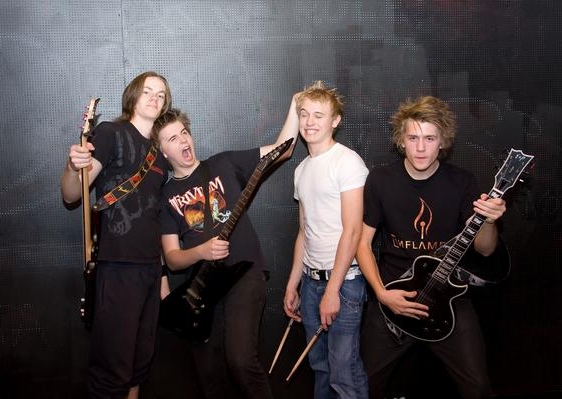 You guys came out with a demo not too long ago, correct?

Daniel: Yeah, we put out our second demo not too long ago! its still fresh out on the internet!

How has the response been from your fans so far? And how many new fans has it created?

Daniel: Well we have been a little lazy on the promotion lately, so there is still a lot of people that don’t really know about the new stuff yet! But yeah, you know people that had our first home recorded effort, Phoenix (2007), got really excited because the songwriting is so much better and we went into a real studio and did it so it sounded a lot better.

For the people who don’t know you, who will read about you on my site, give a little summary of what everyone will hear once they listen to your demo.

Stian: It’s a four song EP we recorded during the fall of last year. Our first demo was very metalcore and screamy. But this one is more progressive and less screamy.

Daniel: And we went over our influences and tried to incorporate all of our listening habits into the songs so it became very mixed and stands out as its own thing.

Have you thought about releasing a full-length album soon?

Stian: Right now we have jumped back on getting some live shows and doing some more promoting. But yeah, if it is in the stars. If we keep on writing lots of cool material and we have enough songs down that is definitely something we will think about doing.

What would you imagine or want your future full-length to be like when you finally do release it, even if it’s 3-5 years from now?

Stian: We want to dive further into our sound and just do what we do best. Jam out cool riffs and try to incorporate more of the “crazy” progressive and avant garde stuff we are into.

Daniel: As long as it stays true to what we want to sound like and what we feel is “us” I am happy.

Good answer! Do you think you’ll make a music video for one of your demo tracks?

Daniel: I have actually though about that ALOT. but the easiest thing to do is to have like a bunch of HD cameras in the studio and record the band recording the song. So I doubt it will happen with these songs, but if we release a single or something like that in the future that is absolutely something that can happen.

Awesome, I can’t wait to see a video from you guys!

Daniel: We cant wait either!

You guys have played a couple of live shows over the last few years…How exciting has that been for you all?

Daniel: I always love doing live shows. Its all up and down you know so we have had some TERRIBLE gigs and some AMAZING ones, but it is all good. Its about learning from your mistakes and all that…

Stian: Live shows are awesome. I love playing the songs we have recorded live, gives out such good energy.

I bet, a lot of artists say they feel like they’re on fire when they’re performing, do you guys ever feel that way?

Daniel: Well! (laughs) On fire! Yeah, if its a really good gig with a lot of good energy and the sound and light rigs are great its just really really energizing! Its like you can play all your shit perfectly because you are so amped and pumped full of adrenaline. It’s all about being in the “zone” when you feel like everything is going right and good; you get to this other level of living that is just great. When you can play every fucking note and sing every fucking tone right.

Exactly! Here’s a question regarding Daniel’s answer above… What were the biggest mistakes you have learned from so far? And how did you make your next performance even better once you realized what your mistakes were?

Stian: (laughs) Our worst gig was not so much our fault but we learned to appreciate a good gig once we had played it!

What happened at your worst gig?

Stian: It was years ago and we played in this little place outside, and it just started raining like hell, and people left, and the sound guy even left. I couldn’t hear Daniel sing or play, I just heard the bass.

Daniel: And I couldn’t even hear the drums, just the cymbals! Just horrible, horrible gig! (laughs) But after that, all gigs that have been not-so-good have felt better. And you learn to play in sync without hearing each other. Its hard to play when you don’t hear the bass drum or snare drum. But if you have played shitty gigs you get better at recognizing small sounds and things, you know? To keep you in sync.

What is the best thing about growing as artists over the last few years?

Daniel: The best thing…hmmm, thats hard. Its cool to just start out as silly teens playing with your shitty gear and wanting to be like Metallica, Megadeth, and Slayer. And then you just practice your shit every day and listen to loads of music and just get somewhere. The best thing is probably to jam out with my bandmates and really have a good time creating music. There’s never any grief about it. You always fight about shit, but you still have loads of fun growing musically.

Fights are always bound to happen, but as long as you can overcome them, and want your band to be heard, you’ll definitely make it big! What do you guys think is the biggest challenge with being an unsigned band?

Stian: People underestimating you all the time. If you try getting a gig somewhere and people have not heard of you before they assume you are bullshit. And you have to send them CD’s and butter them all up and they might listen to it.

You guys should start a street team.

This one is for you Daniel, as the vocalist….How do you take care of your voice with all of the screaming?

Daniel: Thats probably the one thing I am most concerned about both in the studio and live. Because I do a lot of that high singing that I can barely do as it is, that is hell when you have done screaming for a good half hour!

Yeah, you REALLY have to take care of your voice…

Daniel: So, what I do normally is drink some green tea with honey in it! And its fucking delicious as well, so its a blast! That probably is the one thing all screamers should do; drink your green tea with honey it does all the difference! Then, I do all the warm ups of the Melissa Cross DVD, The Zen of Screaming. That woman knows what she is doing!

Why and when did you guys both decide to be musicians and start In Shadows Reign?

Daniel: I got my first guitar when I was 15 or 16. And I played for a while without really having any plans of starting a band. Then after watching live metal DVD’s together for a while, Stian just really got into drums. And he is such a stickler too. he can sit and practice for 3 hours and learn what would take me three weeks to learn. So we kind of just started jamming and figured out that we REALLY loved doing it. We were always good friends even though we were brothers so being in a band with him is the best! we really have a good songwriting chemistry too. Also our neighbor and long time friend Alexander was all about the four-strings, so before we knew it we started jamming and pretty much formed a band.

So when you started to love it, did it click in your mind that you didn’t just want to be a vocalist/guitarist/drummer, that you NEEDED and HAD to be involved, and that it was your life’s calling?

Daniel: Yeah, for me it is like one of those moments when you’re perception of things just changes in 5 minutes. You just sit and jam with your two best friends, and just had your first live show, and you think, “WOW this is what I am now!” I can’t imagine not playing and writing music, it sounds horrible.

When you guys do start to get more recognition and begin to tour more, what bands do you most want to tour with, or share the stage with?

Daniel: Wow I think for me I would say Metallica, Megadeth, Trivium, All that Remains, Avenged Sevenfold, Between the Buried and Me and Opeth! If I ever get to play with any of those bands I will die happy! (laughs) Of course there are more… Lamb of god, Dream Theater, Iron maiden! So much good metal now you know?

Yes! But then there’s some not-so-good metal out…

Daniel: (laughs) Yeah, there’s loads of horrible music out there. It never stops amazing me.

What do you guys want to accomplish most? And what all do you want to contribute to heavy metal?

Daniel: I would like to get signed and put a full length out! And just get touring and all that stuff, but getting a full length album out internationally would be like the number 1 thing right now!

Stian: We would like to create our kind of music and our own sound and contribute a new kick ass Norwegian band to the history of heavy metal!