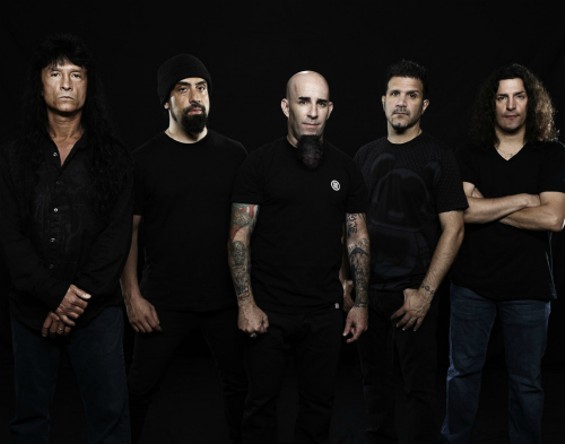 You just released your new album, Worship Music… How do you feel you guys created the depth and life into it?

Well, I’ve been with these guys for a little while. Well, for me vocally, I mean, I just wanted to go in there and just hammer away and you know, I just… I kind of do everything right off the cuff. I mean, some of the stuff I didn’t even hear any of it at all.

Yeah. I didn’t even know I was walking into. (laughs) You know so, it was kind of cool that way. So, nobody was there too, on top of it. So I didn’t really have anybody to kind of making suggestions and stuff, just me and the producer, Jay Ruston.

Yeah, it was nice. I liked that, I would prefer that more often because then you don’t have any– people are always interjecting and things that aren’t necessary. It’s like, “Just relax! Just do this right now.”

Yeah. How do you feel you connected to it, even though, like you said, you didn’t really know what you were walking into?

Well, I connected because I have my own little style that fits with what they do and I just seem to really expand even more so because everybody– I mean, I’m getting a feedback from these guys thinking, “Are they going to like it or is it a little too new for them?” But, off the bat, like when I did Crawl first and we sent that on, everybody was just [like], “My God, this is cool! Alright! Excellent! Ok!” They were on board and I just kind of started hitting the songs one by one and everybody was just real comfortable with the album and it was just a natural thing, I don’t know. I don’t really know; I don’t know… People ask me why things hit the way they hit, that’s just– you just don’t know. I mean, even when I joined them, I didn’t even know anything about them. So, it was like I walked in and started singing again and even then, I hadn’t even heard myself sing, so I didn’t even know what I was going to bring to them vocally either because I got off right off the bat and just… I don’t know. I don’t know how to describe it really. Again, that’s really interesting. A few artists have told me it really happens naturally, I try to get them to explain it, but they tell me it just happens…

Everything I do originally, I do right off the cuff. I don’t sit down and try to find anything in particular, you know? I mean, the song, the way the music’s laid out kind of puts me in that key; the format, whether it’s fast or slow, you know?

Yeah. How do you feel your fans have been connecting to the album?

Excellent. Man, I’m like, overwhelmed over it. It makes you feel good about, you know, exploring the songs, knowing that they’re digging it. So it’s just, as you play them live, people start to get accustomed to a live form. So, that’s kind of the new thing now, you go out there and play live and try to find the pockets of the song and try to get them on the– some songs, they look and they watch; you know, Antisocial or something and you got the crowd going and singing and stuff! Some songs like In The End [Worship Music] and I’m Alive [Worship Music], they really just kind of, straight up and people just kind of watch, you know? Which is good, it’s more of a different– but I’m good with that, see I don’t need everybody to be like, “Arrrrrrrrrggggg!!!” All the time, you know? Because I like to get into the songs, so just– you know, I’m a watcher too. I go to a show, I just [snaps] kind of just jive with the tunes. Yeah, I don’t even care if anyone’s beside me or behind me doing anything, I’m just in my own listening mode.

Yeah. Playing live obviously is different from recording and being in the studio… You guys have an on stage energy, do you guys try to take that energy you have and incorporate it—

Well, the studio, for me… I get there and I know that I’m going to have the headphones on. So, the headphones kind of restrain you for that. You stay in there for one– I mean, this time I was in a closet singing maybe from here-to-there [motions a space inside the back lounge of the tour bus]. It was a small little room! I mean, it was no bigger than somebody’s closet. So, I mean. Just to– I didn’t even see Jay. I was off to the side. I literally stayed in that room for three-to-four hours, I didn’t even think… I don’t know, I don’t– I don’t know. When you sing… You’re in there doing it hard for a length of time where live, every song it’s a little different, there’s a (inaudible), there’s a top, but we’re just going and going and going. So, I don’t know… You go for it, totally! I mean, vocally, I’ll hit it as hard as I can, within reason. Live, you might not go as like you’re not going to sing tomorrow, you just kind of have to roll-pace, you have to guide your pace.

It’s been a while since you’ve recorded anything with Anthrax… How was it when you initially began, you kind of touched on it earlier. But, being away from the studio for such a long period of time and coming back–

Well, I guess the hard part too, is when you’re in a band, then you’re out, and you’re wondering why are you out, what are you going to do this time that’s going to be different to them when you weren’t with them. So it’s like, “I hope I’m going to do something–” Although, I mean, I felt what I was doing before was fine, but it was just somehow there was just a mix up of what they were looking for. So as I started singing, I’m thinking, “What I do, is what I do.” So, hopefully what you didn’t hear before, you might hear now.

I don’t know. I really, I put it this way, things weren’t going to go well, that I really didn’t stand a chance, for some reason, and time. There wasn’t very much time to finish. I remember calling Jay, “I’ve got fourteen days on my calendar, what do you got?” We found fourteen days. And of course, if we didn’t finish at that point, we were going to do some live shows, we were going to go on the road, I don’t know if the record would’ve even had a chance to get out by September at all. So, you just hope what you’re doing is cool.

I mean, it was overwhelming enough that everyone dug it. I’m beyond that point of worrying. I just said, “I’m going to do what I’m going to do and hopefully they’re going to naturally like it versus going ‘shit, it’s cool, I wish we could do something else…'” Even me, I didn’t even fool around with the songs either, it’s not like I said, “Hey, you know, lets get rid of the bridge in that song, or lets shorten that, or lets change the key.” You know? We didn’t do any of that kind of stuff. It was just like, you stuck with the song, you know, and I also did my own thing with it, but I didn’t take the arrangement and rip it apart. And we did some extra recording with the drums, and the bass, and the guitars, and all that kind of stuff. And vocally, I just did whatever I could with the frame. Some artists they say they create their music with a certain feeling or vibe, what would you say you wanted everyone to feel, or did you even want anything like that with Worship Music?

For me, I just go with the songs… Whatever the songs, how they’re laid out, is where I’m going to go with them, you know? Certain– obviously we have a couple ones that are a little slower that are kind of dark, nothing happy in our stuff, you know? And then there are good hooks, there’s– you get good hooks for the songs, some of them are fast and a lot of words, you can just rip it out. I mean, I don’t– obviously I would try to get as (pauses) full of it, you know, fullness of it, I don’t know. I just… People ask, “How come it’s heavier?” Or, “How come it’s harder?” It’s how the songs were laid out that way… So, that’s the way, I don’t know, that’s the way I went with whatever was handed to me. I didn’t even have time to get into modes. I think In The End was maybe the one time I felt like [I was] in a mode because, I don’t know, it was just the way it was laid out, it was cool to just get that pulse that felt good. But then I realized that this could be about Ronnie [James] Dio… I’m like, then I started feeling that mode. That was the night too. The night I sang that was the year of his passing… So, that was a weird thing… That was the only time I had any kind of weird vibes, modes…

Music is a journey, you’re always on a path that is lit with a burning flame of passion…..And over the years how has that passion evolved for you since being in Anthrax and how would you describe the moments where that flame has burned brighter and how it’s been significant for you?

Well, I just think as a singer and a musician, you keep striving for you know, heights of “better” and I feel that’s what I try to do and that’s where I keep doing and I keep being prepared to be better, versus just going through the motions, you know? And it’s very important to do that. Some people, I’m not sure that they think they’re as better or they think they’re already there, so they don’t try to get anywhere, or they may even over think it. So, I just kind of keep looking for an extra bit to get better. Hopefully everybody else understands it and feels the same way. At the same time, I don’t know if I’m reaching out to anybody around me, I just know if I feel better, I’m succeeding, and you get that from the fans too, and they give you a thumbs up, you know that your journey is better. (laughs)