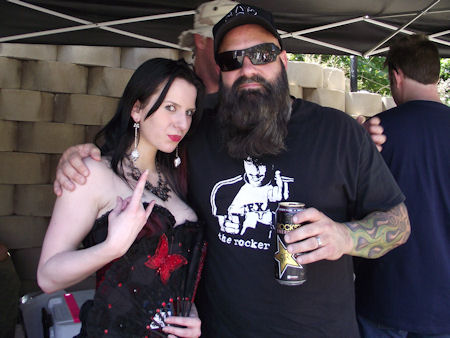 Kingdom of Sorrow has two albums out, one of which you released in June of last year… How would you say that your sound evolved from your self-titled album, “Kingdom of Sorrow” to your most recent release, “Behind the Blackest Tears”?

The first one was more– because I’m in Down and Crowbar— the first one was more like Crowbar meets Hatebreed, because Jamey’s [Jasta] in Hatebreed, obviously. So, I think with the second one, we really kind of found our sound a little bit because it’s really evolved into a Kingdom of Sorrow sound now. Like, our writing together and with Charlie [Bellmore], our other guitar player as well, is coming up with some really killer riffs. The writing is kind of gelling and kind of getting our sound tied, so it’s a lot more fun really. No. This tour is difficult for us to even squeeze in. I just got back from Europe with Down; I got four days off [after Mayhem Fest], I got two Crowbar shows, and then a week later, I start my Down tour! He [Jamey] leaves for Europe with Hatebreed after we get back, so it was all we could do to squeeze this in and make every show. So it’s– you know, next year sometime when things cool down, we’ll get back together and do another record. It’s a lot of fun and it’s going good!

For your next album, when you all do have time to work on it, how do you want it to evolve more with your sound and whatnot?

Just what we’ve already started to do, which is get away from like all the bands, all the new bands today really– all the heavy new bands are really… There’s a lot of great ones, but there’s a lot of very– we’re trying to get away from the really fast stuff, double-kicks, and whatever, and do more of an organic– cause he [Jamey Jasta] comes from a hardcore background. I come from a 70’s and early 80’s rock and metal background.

So, we’re organic. We just plug in and you know, there’s no triggers, there’s no backing tracks, which is great, but that’s not really what we want. We want to kind of get further away from that and get a little more into, you know, just doing our own thing; separating ourselves from that.

Whenever you’re in the writing/recording process, whether it be with Crowbar, Down, Kingdom of Sorrow, or anything else; how would you translate your energy that you have on the stage and integrate it into a record? It’s a totally different world, you know? I mean, it’s a different energy; the record is a different… Records are like fun to make in the sense that when it’s done, it’s an accomplishment and you’re like, “Wow, we created this piece of work that’s going to last forever.” But, it’s not fun to make in the sense that it’s– everything perfection, you really have to be on top of your game, everything’s got to sound perfect because it’s going to be scrutinized, you know?

Live, it’s more energy and aggression and more raw, you know? And it’s more of the vibe of feeding off the crowd, where in the studio, you’re feeding off yourself. You’re just like, “Jeez, I’ve got to play this thing right, so I can do it again.” So the writing is enjoyable, writing is fun, playing live is fun, recording is not fun, but I do enjoy it. Like I said in a sense of when it’s done, you can look back and say, “Wow, I really accomplished something special.”

I was at your Down III release party and listening to that album now and all of your others in general, they’re really full of life and passion. How do you give an album like Over the Under that “life” to it? I don’t know… I mean everybody’s just passionate about what they do, you know? Phil’s [Anselmo] such a good singer and he’s really an emotional– he’s the best singer out there today as far as I’m concerned, hands down. Nobody sings anymore or screams; he’s a throwback to fuckin’ Glenn Hughes [Deep Purple] and Ian Gillan [Deep Purple] and David Coverdale [Whitesnake], and you know, real vocalists. I mean, Rob Halford [Judas Priest], whatever. I’m talking real vocalists.

Yeah, I remember in the earlier Pantera albums, even before Cowbows From Hell, he did have that Rob Halford voice!

Yeah, yeah, absolutely! Like, Cowbows From Hell and shit, he could do it, he can nail anything. Yeah, but even before that! [Pantera’s “Power Metal” Album].

Yeah, and also going back to my question of bringing music to life, like with Kingdom of Sorrow, was it different as far as the process went or was it the same as like with Down’s albums that you just explained to me?

Kingdom’s [of Sorrow] different in the sense that it is a band, because it is a side project. It is mainly me and Jamey [Jasta]; like, everything’s kind of– we do it differently than we do [it with Down]. We don’t get together and rehearse and go, “Let’s write this week and write songs and whatever, and then demo them.” I’ll go up to Connecticut and Nick [Bellmore], and Charlie [Bellmore], our drummer and guitar player, and we write everything on the spot, and we record it right there.

So that’s why we go; we learn everything. Like, we write it, we record it, and then I’ll listen to it and go, “Sounds great!” And go back to work on my other bands. So, coming back to it, I was like, “Wow, this shit’s killer, and I kind of forgot all of it, so let me go re-learn.” It’s a totally different style, it’s a lot faster stuff than what I do in Crowbar and Down. But it’s a lot of fun. Yeah, and I just received your new Crowbar album a couple months ago–

Yeah, as I was listening to it, it sounded a tiny bit different from your previous records that I’ve heard… What exactly did you want out of Sever the Wicked Hand?

Just to put out every influence and every element that’s ever made up a Crowbar’s sound into one record. Because I’m touched upon some of these things maybe on one song here and there over the course of the previous eight albums on our ninth album, but I’ve never put it all on one record. So to me, it’s all a Crowbar record because it’s got everything in it, you know?

I am a huge Down fan, and with each album, the way they’ve progressed over the years, like the first one [Down Nola], you can tell it’s raw, the second one [Down II: A Bustle in Your Hedgerow], it’s heavier in a sense and even more melodic, and then the third one [Down III: Over The Under], it’s completely different with some of the sounds, lyrics, etc… How would you describe the evolution in your way? How would you describe the way your passion you have translates into any of music that you write?

Yeah, and you guys have such a strong connection with the fans, I’ve seen it with Down, I know it’s there with Crowbar, and I can’t wait to see it with Kingdom of Sorrow later, why do you think makes it strong?

Because we’re honest. We don’t go with the flow, we don’t change our sound and try to be the new big, “Oh, these guys are selling a bunch of records, they’re doing this, lets go to that style, lets do this. We do what we do. If you like it, love it, or hate it, that’s ok.

Yeah, also with the newer music that’s coming out, I was listening to you [and Jamey] on Loveline the other night, and you mentioned Ghost– Yeah, I mean what do you think– they’re so new and they’re so different–

That’s why they’re great. They sound like nobody out there. They’re like the only new band, you know, other than Haarp and a couple of Phil’s bands [on Housecore Records] I really do enjoy honestly, not just saying that. They’re a great band and great guys. But Ghost is something totally different, it sounds like a 70’s band to me. It sounds like Blue Oyster Cult meets King Diamond/Mercyful Fate or something. You know, it’s great! It’s totally killer and original, so I love it!

And the image they have, the masks–

Yeah, the image and shit is really cool. And you know, I think what they’re doing is really fresh, and heavy music needs that right now because everybody’s going so over board in the other direction; every band 500 mile-per-hour kick drums, you know? And they just need vocals and melodies and beautiful chord progressions. Have you heard their cover of Here Comes The Sun by The Beatles? YouTube it, Phil [Anselmo] sent it to me in an e-mail, and it’s incredible! They show you how talented they really are. They totally re-wrote it and made it their own, it’s incredible. Since we just ran out of time… Is there anything else you would like to say real quick?

Just thanks to all the fans of Down, Crowbar, and Kingdom of Sorrow today, and hopefully you know, we’ll jam here in a little bit!