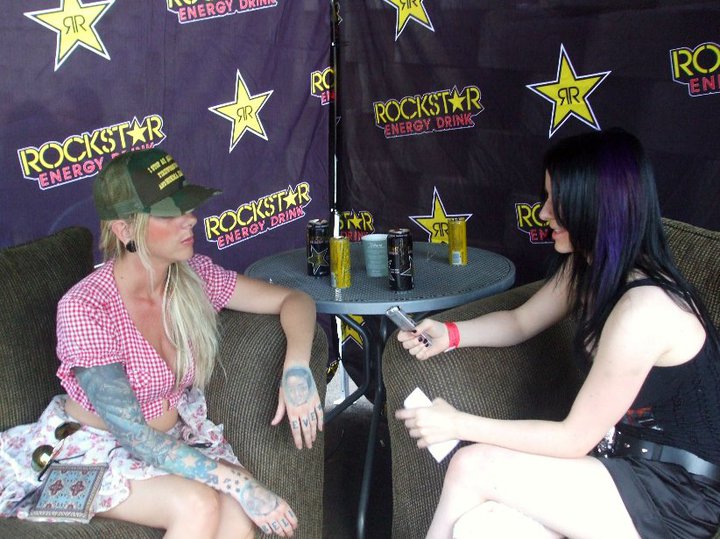 How has Mayhem Fest been treating you thus far?

It’s phenomenal, I mean it’s everything we thought it would be, it’s so awesome. We’ve got to do Ozzfest before and we did Warped Tour last year, so it’s kind of like that summer-theme feel, it’s one of my favorite tours. It’s a great crowd, the bands are awesome, we’re friends with a bunch of them. We’re just super excited and happy to be here!

I was able to see some of your set earlier and I saw and heard your fans going absolutely insane, how does it make you feel when a crowd is so passionate towards you?

It feels good! I mean, that’s the whole goal of it every day, is to get the crowd to lose their mind and have fun and go crazy, so every day has been pretty awesome, and we haven’t had one show where we felt like it sucked, except for one where we had technical problems one time, but that wasn’t the crowd’s fault. They didn’t even notice, they’re so awesome. (laughs)

The numbers in women in rock ‘n roll and metal are pretty much growing a lot, which is a great thing. I think that metal music, it’s an aggressive side of things, it’s kind of like a way of life, kind of against the grain, and this release of things that’s all built up. So, as a girl in metal and rock, I feel great, I feel liberated, powered and strong. I think it really comes down to, it doesn’t matter if it’s a girl or man, it’s about if you have something to say, it’s about the music, you know? It’s like, it really doesn’t matter if you’re a woman, you know what I mean? As far as like, when you’re laying there listening to your iPod in the dark, it’s not like– it’s more of an emotion in music, you know what I mean?

How has the response been for it, so far?

So far, it’s the best response we’ve gotten ever out of critics and write-ups/reviews. I really think that this is our defining album, I think that we’ve found like, our sound, and it doesn’t sound like anybody else. We’re super proud, it’s a perfect mix between really heavy and aggressive and super melodic, even down to a lullaby, and we found this formula and how to do it all. It flows super well and it just is us, it doesn’t sound forced, you know what I mean? So we’re super proud and excited for that too.

You write a lot of the lyrics, right?

Yes, I write all of them.

Was there anything in particular on this album that was difficult to write?

Ummm… I always write about all different types of things, this new album is kind of like a– it’s kind of a concept album, a little bit, like a thread going through everything. It’s supposed to be a post apocalyptic wasteland and there’s these few left over people searching for new life, and new beginnings, and hope, and light. It’s like my personal experiences that I wrote through, in this kind of story; it’s got like, heart-break in it, of course, and death. But it also has empowering stuff, always hope for new beginnings, a new life. Sometimes you need to be alone and you need to be, I think broken, in all ways to kind of find out what defines you, in order to move forward. So, that’s what a lot of this album is about. Sometimes heart-break and loss, and death even, is good.

Describe in the best way possible, the overall vibe of A Star Cross Wasteland.

The vibe is kind of, like I said, this like, drifter-y kind of like western, dark, kind of desert-y/western world feel to it. Yeah, it has like an apocalyptic feel going through it, but there’s like, love in it, and heart-break, and fighting words, so it’s good.

Was there any lyric you’ve written on this album that has meant the most to you?

I mean they all have so much– World In Flames is pretty powerful to me, it’s about waking up in the middle of the night, the whole world has ignited into flames, and I’m there alone. And it’s kind of like a fear of dying alone and the whole world is burning. And it’s about kind of wanting to have that one person who would just die for you, walk through flames, and be by your side; as long as you guys are together like, nothing else would matter, it doesn’t matter if you’re dying together, you know? So, that song is pretty profound to me, I love that song.

You are very imaginative!

I am! (laughs) I have a big brain with all kinds of crazy stuff going on in there!

Have you ever dreamed about any of your songs before you’ve written them?

Umm, sometimes here and there, you know? I write and paint, just little things like the apocalyptic-y type thing, I’ve had kind of stuff, this and that, just little visions, nothing that was like the whole song I’ve wrote.

You said you paint? What kind of things do you like to paint?

You seem to be very deep and passionate with everything you’ve shared with me. What is it, do you think, that has molded you into being that kind of person?

I think all of my experiences, I think that– I’ve been through so many things, I’ve had a really intense, crazy life, and I’m super happy now and healthy now; I’ve been through like, ten years of therapy and things like that. I think that all of the deep, intense things, a lot of different abuse, and all kinds of crazy stuff. I think it made me really strong and it made me learn how to appreciate every day, appreciate people in my life, so it’s just another good example of sometimes bad things make us appreciate the beautiful every day.

That’s so sweet! With your passion you have for life, how do you think your fans pick up on that, or feed off of it when you’re on stage?

I think that they can– one of the most important things, especially on our album, that we always want to capture, is passion. You know, like, I can sing it 25 times in a row on key, but that’s not good enough. We want to make sure there’s emotion in it that people can feel and hear what’s going on. So, I try to keep that alive in our live show, and I think people feel it, because people go through hard times, people go through all kinds of crazy things, so I think people know and can relate. We get all kinds of beautiful and moving — that’s one of the best parts about being in this, where people, you know, they can relate and you can help them– all kinds of deep, crazy stuff.

What are some experiences people have shared with you that have stuck with you the most?

Oh, tons! I mean, we had like, a lot of people who were suicidal and said that we really gave them hope and made them want to believe in life. This one guy said he was actually going to kill himself and one of his songs came on and it really moved him. And also, this one woman’s son, loved our band tons, and oh God, it was so sad, it was a 15 year old little boy, and he was born with half a heart, and he loved our band, he passed away. And when he passed away, they were listening to one of the songs I wrote for my son. So, it was a really special thing for them and they all got the lyrics tattooed on them and then on our last album we wrote a song for him. It was just, yeah… So there’s all kinds of experiences that happen that you never even expect to come out of music, so it’s like a universal theme music that brings people together.

Was there anything or any experience in your life that sparked your passion for metal?

Umm, I had a rock ‘n roll mom, and my mom was young when she had me, she was 16-17, my mother was taking me out to like, AC/DC concerts and Rolling Stones at like, 5-years-old/6-years-old, and even like Tina Turner and Stevie Nicks. I think at a really young age, I was watching all this stuff, and you know, she liked Queen, she liked Black Sabbath, so I think she kind of put that in me. And then I think with the life that I’ve led, it’s not all poppy and happy, you know? So there’s an emotional side to it that kind of, almost calls for a scream, you know what I mean? Because I don’t scream to be like “yeah, you know, I’m really tough! I could fight you!” I scream ’cause it’s like, emotional and I just want to like, it gets so intense, you know?

Yeah. I noticed that you seem pretty aggressive on stage, but you’re so sweet and nice in person! (laughs)

(laughs) Yeah, people always say that! Because it’s like a whole release on stage, I don’t just walk around like “AHHH!” screaming at people!

Do you kind of get into an alternate character when you’re on stage?

Yeah! Kind of, yeah. It’s kind of like turned into that other side of me.

What has been one of the most important lessons that you have learned as an artist while being a part of In This Moment?

Umm, just how– you’ve just got to believe in things. When I moved to L.A. [Los Angeles] with my son, I lived in Albany, this small town in New York and everybody thought I was crazy, like, “I’m going to move away and be a rockstar!” And everyone’s like, “You’re going to fail in every way.” Nobody can believe that, but I believed it. So, it just goes to show that if you work super hard, and you keep believing, and you don’t let people hold you down or tell you what you can’t be, that you can make things happen. You can do it, you know?