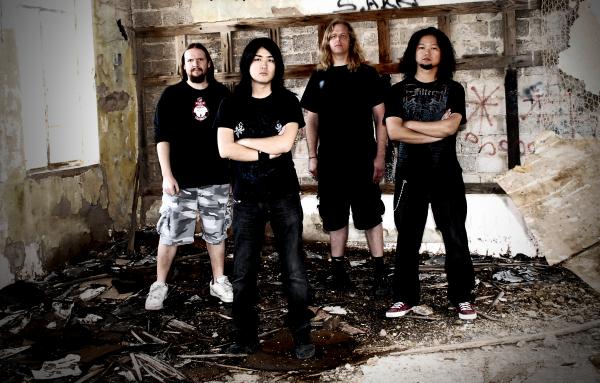 Hemoptysis is considered to be a very new band although you’ve been around since 2007, what has been the most difficult challenge you’ve had to overcome since the formation of the band? Or do you feel like you’re still overcoming?

Reaching to the new people and turn them into fans. We work very hard everyday to move forward, but things don’t happen in a day. We are aware it takes a while, but it is definitely one challenging thing for underground bands like us.

Yeah, I definitely understand that… What has been the most rewarding part thus far, do you think?

We just inked a deal with Rock It Up Records over in Germany. That is the most rewarding part for us, thus far. Their offer was by far the most fair deal and it showed long term interest in our career. Whereas, a lot of [record] labels are just trying to make a quick profit and screwing bands.

How do you feel the entire album, Misanthropic Slaughter represents Hemoptysis?

We are very proud of the praises we are getting. We feel Misanthropic Slaughter represents our unique sound and backgrounds. As you can tell, the base is old school thrash, yet it has a lot of different elements such as death metal influences by drumming and melodic solos. Our lead guitarist Ryan Miller (Also in a band called Excessive Bleeding) describes our music as “Buffet of Metal”.

(laughs) I like that description. When I listened to it, it sounded like you have many genres incorporated within… I think (not 100% sure) it was Phil Anselmo who said that artists these days only are influenced by one or two bands they like and stick with that sound and end up sounding like a rip-off, which creates a chain reaction of hundreds of bands sounding the same… I believe he said that when Pantera was formed, they pulled influences and inspirations from at least 10-15 bands they loved to create their own unique sound… So, my question is: how did everyone in the band pull all of their influences together to create your own sound?

That is well said. I completely agree with Phil‘s opinion. As far as our sound goes, we are not trying to stick with one particular genre which opens up the door. I am a thrash influenced guy, drummer Travis and lead guitarist Ryan are Death Metal guys, and Bassist Sunao listens to everything including non-Metal stuffs. We all bring different ideas on the plate and dress it up when we get together and make sure we all like it. We are not trying to be somebody else because you can’t be someone else at the end of the day.

Very true! With all of the diversity you have within your music, how do you feel Hemoptysis will rise above and set yourselves apart from every other band and succeed?

We hope we will rise above. We hope a lot of metal heads will dig our music because again, our music has different elements, so it’s nothing like just thrash, or death metal. We love what we do and we don’t compromise, so we hope more people will give us a chance and help us move forward.

I’m sure they will! When you first formed the band, how did you envision it would be? And now since it’s four years later, has that vision changed at all?

When Travis and I got together and started the band, our first goal was recording a full length album and other than that was just beyond the dream because it was hard enough to find serious musicians to work with. We weren’t as serious as we are now back then, but things have changed when we released the EP Who Needs A Shepherd?. Now I look back four years ago and look at us now, we are a completely different band and we have accomplished many things. Now we are working hard and hoping we will be able to tour worldwide to promote Misanthropic Slaughter and record another full length record with Producer Ryan Greene again.

That’s amazing you guys have worked with him… In my opinion, that really says a lot about you Hemoptysis as a band, to have someone who has worked with so many high profile artists… I was going to ask later in the interview about a tour, but since you brought it up, do you have any current tour plans?

We are working on the dates in summer now, but touring without having a tour support is not easy especially the gas price is getting beyond ridiculous. We do what we can, but we definitely need fans support in order to make it happen, so if you would like to see us in your area, please help us get the name out and help us making it happen!

I saw that you’re a guitarist… Nick Catanese from BLS told me that even if he picked up a cheap guitar or an expensive one, he’d still sound like him playing; if he picked up Zakk Wylde’s [guitar], Nick would sound like Nick… Anyone can go out and buy the signature series guitar Nick or any other guitarist has, buy all the distortion pedals, et cetera, and realize once they play, they don’t sound like them… Every guitarist in the world is different and has that distinct sound where you automatically know it’s them… What kind of style do think you have and how do you believe it’s different from everyone else… What is something you do when you play that no one else in the world can do?

I make sure to attach my emotion and feeling in my playing. Solos that have no melodies or feeling behind them, mean nothing to me. Like you said, it’s not about the equipment, it’s about your ability. [Guitar] Picking, vibrato, and all those different techniques creates your own signature sound and I think it is very important to have as a professional guitarist. Everybody can tell that’s Zakk Wylde or Marty Friedman when you hear it. That’s my ultimate goal as a guitarist, when people here it, they recognize that’s me.

What is something you want to contribute to metal through-out the next several years? And if you could (or would), how would you re-define the thrash/death metal scene?

I want to contribute to expand the Metal scene bigger and bigger. We all need to work together, means labels, bands, promoters, venues, and fans. Just like day job, it’s a team work. Everybody has to support each other and can’t be greedy you know? Metal is one great music genre, and as a Metal musician, I want to see more people listening to Metal and coming out to the shows. We as a Metal band, hope we can be a part of the bands to build the bigger scene and do our best. We hope we will be able to cross over the thrash/death genre and be able to make more people to pay attention to different sub genres of Metal. At the end of the day, the message is the same and we all love Metal.