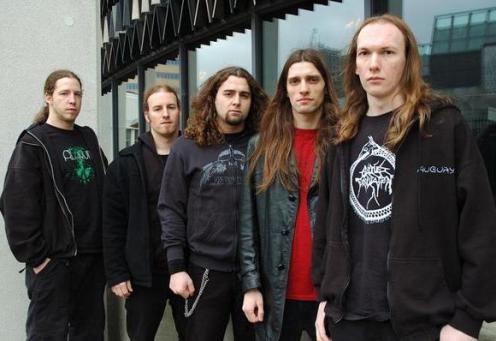 How do you think the tour has been doing so far?

So far, really good. Yeah, usually 200-300 people every night, so it’s good. We’re playing in front of a kind of another crowd than we’re used to. Like more Despised Icon fans, so it’s good, we’re trying to make new fans. Response has been really good so far.

How do you think the economy has affected the crowd turn out?

I was kind of curious because we’re from Canada and we haven’t really been hit yet with the recession but, I did notice that you know the crowds have been really good, like I said 2-300 every night. I did notice that a lot less people are buying merch because they just don’t have the money and because gas, I think it’s going back up now, on the west coast, I noticed that. So I guess if they have more money to spend on gas, they have less money to support the bands, buy the merch, so that’s where I’ve been feeling it.

How do you think the US metal scene in general differs from the Montreal scene?

I think Montreal has its own entity, it’s kind of like any major city, it’s like L.A., it’s like New York, so really it’s not really different from the rest of Canada. But the crowds are, I guess you could say supportive of the local bands, like a local show can draw up to 1000 people, so that’s really cool. A lot of the fans that come out are musicians themselves, they’re all in bands too, so everyone kind of knows each other, it’s kind of a supportive scene. I guess it’s quite a large question as far as the US market is concerned. LA can be different from Des Moines, IA; you know like different parts of the country, people are more laid back. One show, I just remember now, we just played Santa Cruz, CA and that was a violent show, there were tons of fights, a lot of those hardcore kind of dancing-ninja stuff and people were beating on people. I don’t know what’s up with that. We’ve played LA a few times and I always notice that people are observant, I think because they’ve seen so many shows they’re just like “show us what you got.”

What would you say the message is that you’re trying to portray to your fans, instrumentally speaking?

Instrumentally, I guess our roots or our influences are kind of based more back in the traditional style of metal, even starting from Iron Maiden and stuff like that through to Metallica to Megadeth and all that kind of stuff. So we’re kind of taking that approach with our music. I mean we’re not trying to show off what kind of notes we can play, or how fast, or how brutal, or anything like that. It’s basically just to write memorable songs, memorable riffs, make the song make sense, make it flow. You know, we like to play challenging music as well, so we always work something in so you know we’re not just playing three chords or whatever, we try to have melody, aggressiveness, and good musicianship is all important in the music we have.

How did you guys structure your complex sound?

I think it goes back, to like I said, our roots being more partly traditional, and we’re also fans of progressive music and well thought out music as well. Each of us all have our own influences and we practice a lot too, so we spend a lot of time on ideas and arrangements and stuff like that, if it comes out sounding unique, well that’s cool, if it comes out sounding different, that’s cool, I guess. Practicing and not trying to sound like every other band, you know.

When you guys are writing the lyrics and music, what exactly is your process?

Right now, our newest vocalist, he writes a lot of the lyrics before the music is done. He gets inspired by certain things. Well, he starts his lyrics, not necessarily like a song that is formed from the lyrics, he writes his lyrics on his own side from whatever, life, movies, anything like that. Our side, the music side, I write a lot of the music, and our other guitar player writes music and kind of bringing the music from the guitar, so we’re playing it at our own, at our home, writing riffs, then we bring it into the jam room, work it out with our drummer. He comes up with a lot of the arrangements, ideas, so then it’s formed from there. Everyone has their own ideas like, this or that, yes or no, so that’s how it starts. The typical way, I guess.

How do you think the death metal scene has changed since you’ve been touring in your whole existence as a band?

Well I think nowadays, there’s a lot more bands that are playing this style, I don’t want to call it “core” but you know, breakdowns and that kind of stuff, it’s really popular right now. It’s getting a lot of young fans, young people into the music. So that’s cool, it’s a positive thing. I just think that with all these bands, there are a lot of generic bands; a lot of bands sound the same, so that’s kind of unfortunate. But, we’re kind of doing our own thing, so we’re trying to stick out from the rest of them, so hopefully it’s working.

When you’re on stage performing, how do you establish your connection with the crowd?

What helps is when the vocalist/front man is able to portray his personality to the crowd you know, some guys are really shy, they turn their backs, he tries at least to interact with the crowd, you know, talking to them, smiling to them. That’s a really big thing, smiling. If you get a smile from the singer, you’re going to smile back, you know? That helps. Musically, all of us, we always put in a lot of energy; we’re not just standing there like statues. So hopefully all of that together you know, gives an intense performance and hopefully people remember us from that. That’s what we usually do.

How do you try to stand out on the stage from all the bands?

Well, we don’t intentionally try to do that, we hope we do it but there are so many bands, there’s a lot of good bands, a lot of bands that are really energetic, so we gotta keep up with those kinds of bands as well. We just try to do our own thing, like I said, we just put as much energy and intensity into it and like I said, our vocalist is good with interacting with the crowd, getting them to feel part of the show, not just watching us, you know, being part of the show.

Are you guys going to be working on a new CD soon?

Um, right now our new album just came out last summer in July, so we’re still promoting it. We’ve done Summer Slaughter Canada which was good. Did the Faceless tour back in November, a US tour. We’re doing this and then we’re going out with Cannibal Corpse in April, that’s gonna be killer, and then maybe in the summer we’re going to try get to Europe. Between all of this and breaks, we’re going to start writing the new album.