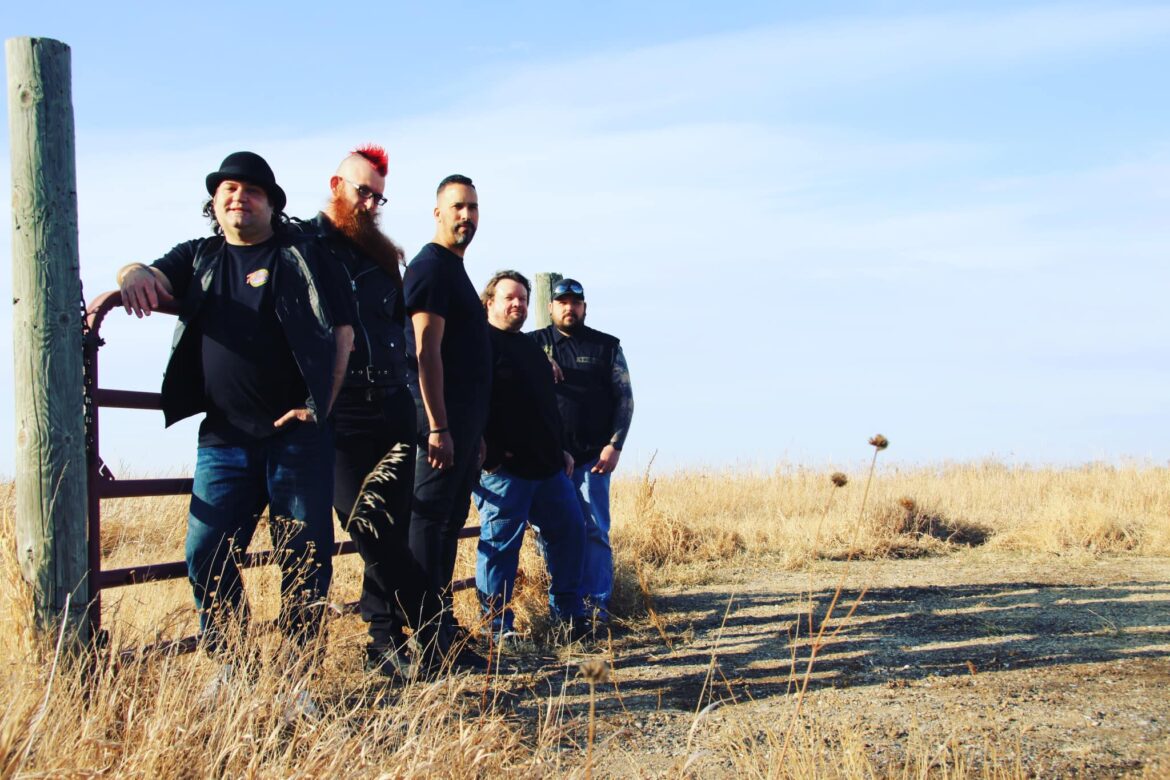 Shotgun Facelift are a band that combine Groove, Death Metal, Blues, and even some Hardcore/Metalcore elements into their Music with a bit of a Melodic nature. They are based out of a small city in the Northeast reaches of North Dakota that borders Minnesota and is only a short distance from Canada, called Grand Forks. They are comprised of bassist Curt DeCamp, drummer Jody Smith, guitarist Matt Person, guitarist Damian Goulet, and vocalist/lyricist John Huber. They are a band who Manifest such maniacal live energy with each of their performances that each and every single person in the crowd feels.

Shotgun Facelift compels everyone in the crowd to move, violently headbang, scream, growl, and even cause the entire floor to mosh in unison, which reminisces a Viking-style brawl where everyone walks out of the venue after the show with huge smiles on their faces and the need to relive these extreme and primal moments over and over again, which is why Shotgun Facelift’s die hard fans keep coming back for more! They also treated the audience to three new songs that aren’t even released yet, one titled See You In Hell, which is also discussed in the interview!

They released their newest album titled Dakota Blood Stampede in December 2021 through Eclipse Records. In our two-part hour long interview, which took place inside the The Aquarium, upstairs from Dempsey’s Pub in Downtown Fargo, Shotgun Facelift discusses how the title track of Dakota Blood Stampede captures the energy and Spirit of North Dakota, as the intention behind the song was written to be an anthem for our state.

We also chat about their song, Suicide Eyes, which embodies the state of mind of severe depression not only lyrically, but Musically, and especially through their Music video.

You can watch Part One of the interview at the top of the page. Scroll down to watch Part Two and read some highlights and excerpts from our interview!

Also! Sending an immense THANK YOU and big hug to The Aquarium for letting us use their office to conduct the interview!

*Please note the video may appear shaky, we did the best we could to make sure everyone was on camera!* 🙂

Curt stayed pretty quiet during the interview, but he also talked about how he throws his emotions into his Music rather than talking about it. So, definitely check out his fucking epic bassline intro to Dakota Blood Stampede above!

When asked about how they feel Dakota Blood Stampede captures the energy and Spirit of North Dakota, John said, “When that song came together, it was really Groovy, just had a lot of ‘snort’ to it, and that’s kind of the Dakota that I grew up in. I know everybody’s going to freak and have their own opinions on a lot of that, but the Dakota that I grew up in with my Dad and a lot of the family members that I’ve got, it was really forward and blunt, and people told you the way that they felt, but people did the right things for the right reasons, because they were the right thing to do rather than receiving any kind of reward or anything like that. I guess politically, creatively, Musically, I feel like a lot of people get away from some of that and it’s just not something that we’re down with, at least not in this band, speaking for myself. But speaking for the whole band, we feel like doing what’s right is important and we just stand by our word because if you treat people the right way, you don’t have anything to hide and you don’t have anything to back up on, and worry about crossing over. “

Jody expressed, “I think the song captures the Spirit of North Dakota because it just stomps, and because we are a rough, rugged state, and that’s what we’re representing, that we are no-bullshit, no non-sense, and we’re going to kick you in your face, but then we’re going to pick you up when you’re down also. [“And give you a hug!” Says a background voice!] But still mean business and that’s just the way it is in North Dakota.”

Damian, who was sporting some pretty cool Blackcraft Cult attire, replied, “Yeah. For me the song embodies, you know, you got your harsh winters, they’re brutal. So there are brutal parts of the song, but there’s also a niceness to the song, and to me, you get through the brutal parts and you have something to look forward to at the end, kind of like the end of winter in North Dakota.”

Fan Fact: Three members of Shotgun Facelift have Pantera tattoos. Pantera are a huge part of why Shotgun Facelift plays and writes the way they do!
John elaborated, “when Pantera did Cowboys From Hell, like everybody at the time was, if you didn’t have a fiddle, nobody was interested if you were from Texas. And so Pantera was like, no we’re doing this Metal thing, but they didn’t fit in Texas, but they still Loved Texas, so they made Texas fit them. So, it was this really cool, sort of exercise where everybody could grow together, where everybody could embrace Pantera, and Pantera could embrace Texas, and everybody sort of gets on with people they never would’ve gotten on with before. And that’s one of the things that I tried to channel when I put a lot of the lyrics down, especially to something like Dakota Blood Stampede.”

When discussing Suicide Eyes and the Music video for it, which borrowed the song structure from November Rain by Guns ‘n Roses, the entire band elaborated on their own personal takes and meanings of the song.

Damian said, “The thing with that video and that song in general is that it puts you in a place in your mind you’re not comfortable to be in, but it forces you to be in that position, and forces you to confront that. And for us, when we originally wrote that song, we’ve all had to deal with friends, family members acquaintances, you know, with either taking their Life or threatening to do it. And it forces you to look at that aspect of Life face-to-face. It doesn’t sugar coat nothing. Instead, it makes you uncomfortable, but it forces you in a place where your mind doesn’t want to go, but at the same time, it’s therapeutic. It was for us, at least, when we wrote the song.” He continued, “And also the closeups in the video. Each person is basically portraying the emotion they feel when they’re in those positions. …  So, the closeups in there are of how we feel in those situations. That was just another part of the video that Kevin [Ackley, director, Chamber Six Media] wanted to portray.”

John explained the feeling behind some of the lyrics, “The lyric root I go back to, the deepest part of the song, where it goes “breaking my skull against the concrete, to split my skull wide, and release the thoughts within” – the fact that that’s what it feels like to me battling with mental illness and depression and all that kind of stuff too. John continued on, “Suicide’s one thing…But it was always like a gun wasn’t enough. I need to bash my head into the concrete until it splits, like that’s the only way to get the thoughts, the gas in your head, the poisonous gas to release it.”

Another topic we cover in the interview is a very open, raw, and honest discussion about addiction and sobriety and how it can make you feel, coming out of it, and more. They also chat about Pantera, Metallica, their own live shows & energy, the sound to their Music, and their new album that they are in the process of writing right now, which has some Southern and Bluesy vibes to it and is set to release sometime next year!

You can also catch Shotgun Facelift live at their newly announced FREE SHOW in St. Paul, MN on July 30th at The Keller Bar with BLOODGEON and Daigoro presented by Midwest Metal Promotions! It is a 21+ only event, make sure to have valid ID! 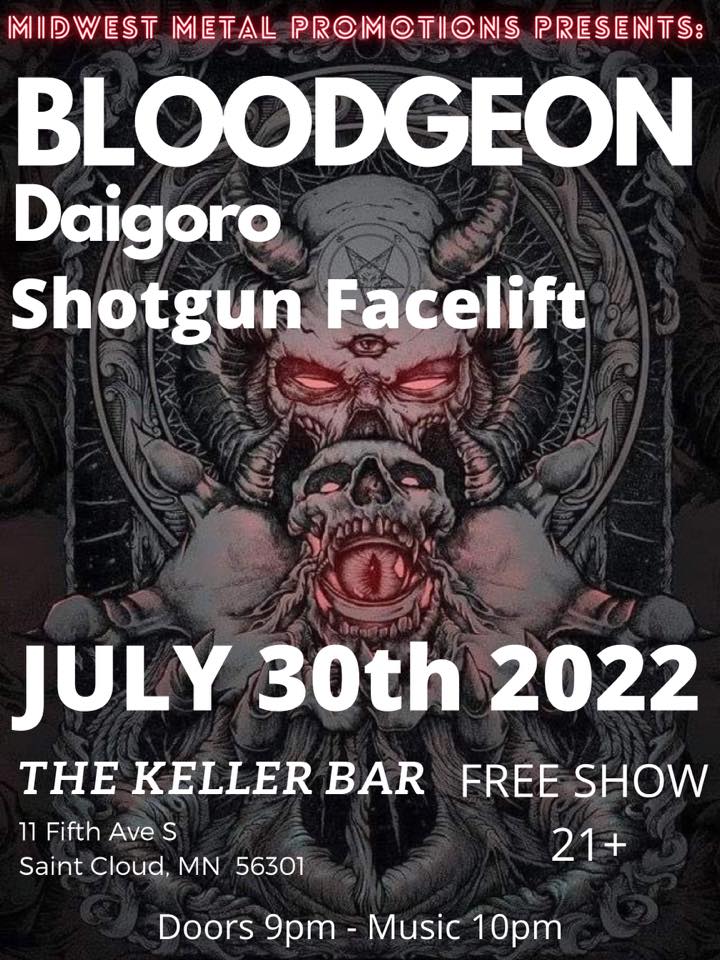 “That’s the point of Art, is connecting with people you’ve never met over something you created. And I feel like in Shotgun Facelift, we walk it, we talk it, and that’s what we produce.” 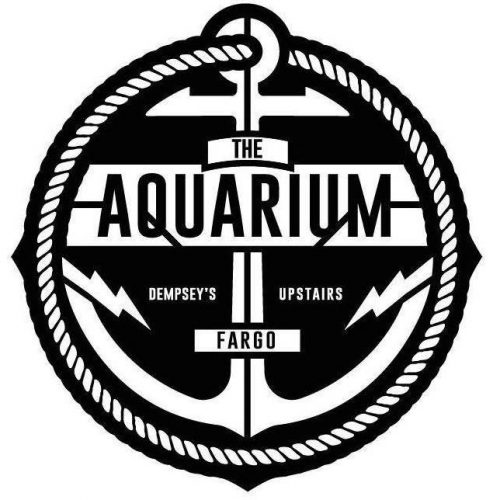