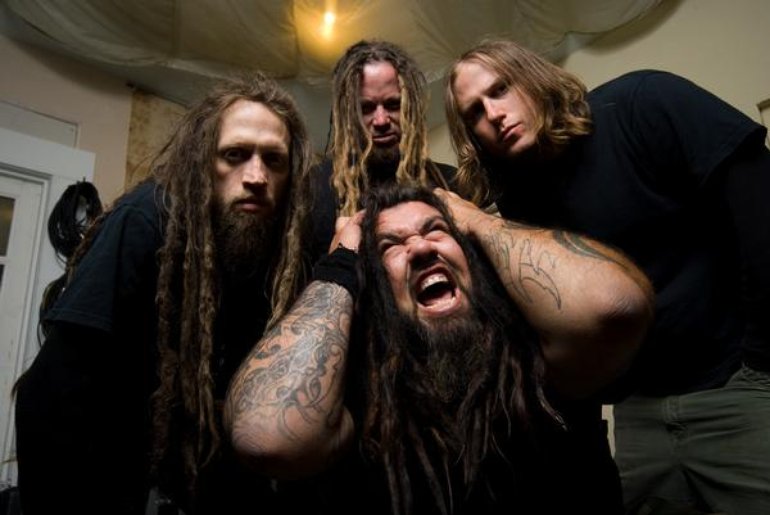 Your new album The Scars Between Us is set to debut on September 15, how excited are you guys for it’s release?

Yeah, we’re very excited, its been a long time coming. You know, we’ve had– of course we went on a three or four year hiatus and then took another year and a half to write the record. So yeah, we’re more than ready and we’re really antsy to get it out there and tour.

I’ve already heard the album and it sounds amazing, and can you give me a little summary of it for those who haven’t heard it yet?

Um, well I mean, if anyone should know with our background straight off the bat, we haven’t strayed too far from what we’re known from before, but we’ve also taken a couple of different chances on this album — more so in the direction of just being more straightforward than trying to get, I would say kind of molding from the new school of what’s happening right now in the music industry, you know? We’ve kind of stuck to our guns more of in a meat and potatoes way, like I would say in a Hatebreed vein; in a Crowbar vein, you know? Down. More simple words of a less is more kind of attitude. The last record, we kind of ventured off in a little bit of radio land and we gathered our senses, as you know. For this album, we just went straight for the throat, you know? (laughs)

You guys streamed your album on MySpace two weeks ago, how was the response from doing that?

The response was great, of course the people who write into our MySpace and our different profiles usually are fans; we tend to get buttered up from them and everyone’s really psyched and stuff like that. Across-the-board the different sides and everything, we’ve got some mixed messages and some different people that didn’t really care for the record, which is fine with us cause’ every genre and every person is going to have their own personal favorites. So we’re pretty happy with the response we got and like I said it’s been a long time coming, so there’s a lot of people who don’t even realize who Skinlab is; who we are. So, we’re looking forward to putting the record on shelves and the release date is coming up, so hopefully we’ll do pretty good!

How would you say the artwork for your album represents what the CD is about?

The artwork is actually based off of a guardian angel symbol and if you notice it’s kind of almost like a scarecrow type of symbol there with the wings; its basically the guardian angel, but kind of modified. And it basically represents kind of — to me, it represents us very well because as you know being gone for a long time, we’ve been trying to come back and a lot of doors were originally open for us, have been closed and a lot of backs have been turned to us. And we kind of feel like we were at almost a salvation point where it was do or die. We’re out there and that’s where the album artwork comes in with the guardian angel symbol and the buzzards/vultures flying around it (laughs) kind of waiting to pick it apart. Like any triumph in the story, we’ve got a long ways to go and we’re definitely up for the the challenge, and we’ll see what lies ahead of us. But for the most part, the artwork is the artwork you know? It doesn’t have a direct relation to the band for or to the album meaning, even though it is a very cool and suggestive cover. (laughs)

You guys released a music video for “In For The Kill” — who came up with the concept for having it look like a UFC fight?

I came up with the concept and it was kind weird because I was talking to the director who I ironically just got off the phone with (laughs), talking about the next video. And anyway, I was talking about wanting to use some UFC fighters because I was — around the time we were about to start the video, a movie that was released by TapOut Films, that I was in, was actually released around the same time that we started talking about doing the video. So it’s kind of ironic and I was just like “You know, I would really like to involve the MMA scene as much as possible and maybe get an octagon and stuff like that.” And he’s like “Wow! That’s weird! I know Nate Quarry, he’s a really good friend of mine, I’m sure he could come down.” So we ended up hooking up our managers and his agent and everything and kind of made it all come together. And it did! (*Note* The other fighter featured in the video is Greg Thompson.) So we were really stoked with the outcome. We actually filmed at an Oakland and so far it’s getting a pretty amazing response.

What is your next music video going to be?

Your guitarist Glen Telford he recently departed from the band again, what were your initial feelings towards that and how did it affect the band, if it even did?

Well you know, it is affecting us right now because we’re finding ourselves scrambling before a big tour about to come; our first tour for this record cycle. You know, we’re playing with Death Angel this Saturday, and in true Skinlab fashion and we’ve never been– like I said, we’re always up for a fight and a challenge and we never let it down. So we’re available to come full circle. We’ve got a replacement — actually, this first show with Death Angel this weekend is the first show our drummer isn’t gonna play with us, so ironically our first show with our new guitar player, Paul’s not going to be there. (laughs) He’s run into a family emergency and had to take out of town yesterday, so we have Andy from 40 Grit jumping in and playing. So, you know to tell you the truth, it was bad timing, but we knew it was coming. As far as music wise — me, Snake, and Paul — we are Skinlab. So, it didn’t affect us too much. You know, me and Snake, pretty much dialed down the record, Glen came down and did his part because we knew he was on his way out; not so sure he did, but we kind of did. And when it came time we booked tours and he couldn’t make himself available; so, some people want to be rock stars and some people don’t, you know?

Who did you bring in for a replacement guitarist?

Buzzard, who plays bass with 36 Crazyfists, is actually going to be our new touring guitar player We’ll see after this month if he’s gonna become a permanent member, but as of now, he’s been our bro, he’s been in Skinlab; he filled in when we when we kicked out one of our guitar players on on our first record, Buzzard just happened to be there and he filled in for us on the Stuck Mojo tour actually and broke his leg while playing with us. (laughs) We’ve known Buzzard for a while and we’re glad to have him with us as an extension of our family. So having said that everything worked out pretty damn good because his playing is fucking heavy as hell, his playing is a lot heavier than Glen’s. He knows Skinlab, he knows our stage presence and we’re gonna go throw down Saturday as if we never skipped a beat.

What are your feelings towards playing with Death Angel this weekend?

I’m fuckin’ stoked, it’s Death Angel! I grew up on Death Angel, you know? I used to walk up to their house as a little kid and sit out in front of their garage and listen to them. They’re all good friends and brothers and we’re gonna have a good time, and it’ll be a really cool show.

What can everyone expect to see come out of Skinlab for the rest of 2009 and throughout 2010?

Well, throughout 2009 we’re gonna be touring, we’ve got pretty much September and October booked right now; we do Australia in November and December, actually November 30 – December 12, and then we go to Europe for a couple weeks, and then we come home, and then we do the second part of our US tour — and this is just off doing headlining stuff. We might get on some tours and who knows we’ll cross their fingers. But, if we have to do it ourselves we’ll be out there pretty much through the beginning 2010. And then and then we plan on being in the studio recording our next album around the same time next year.

So, there’s a new album in the works?