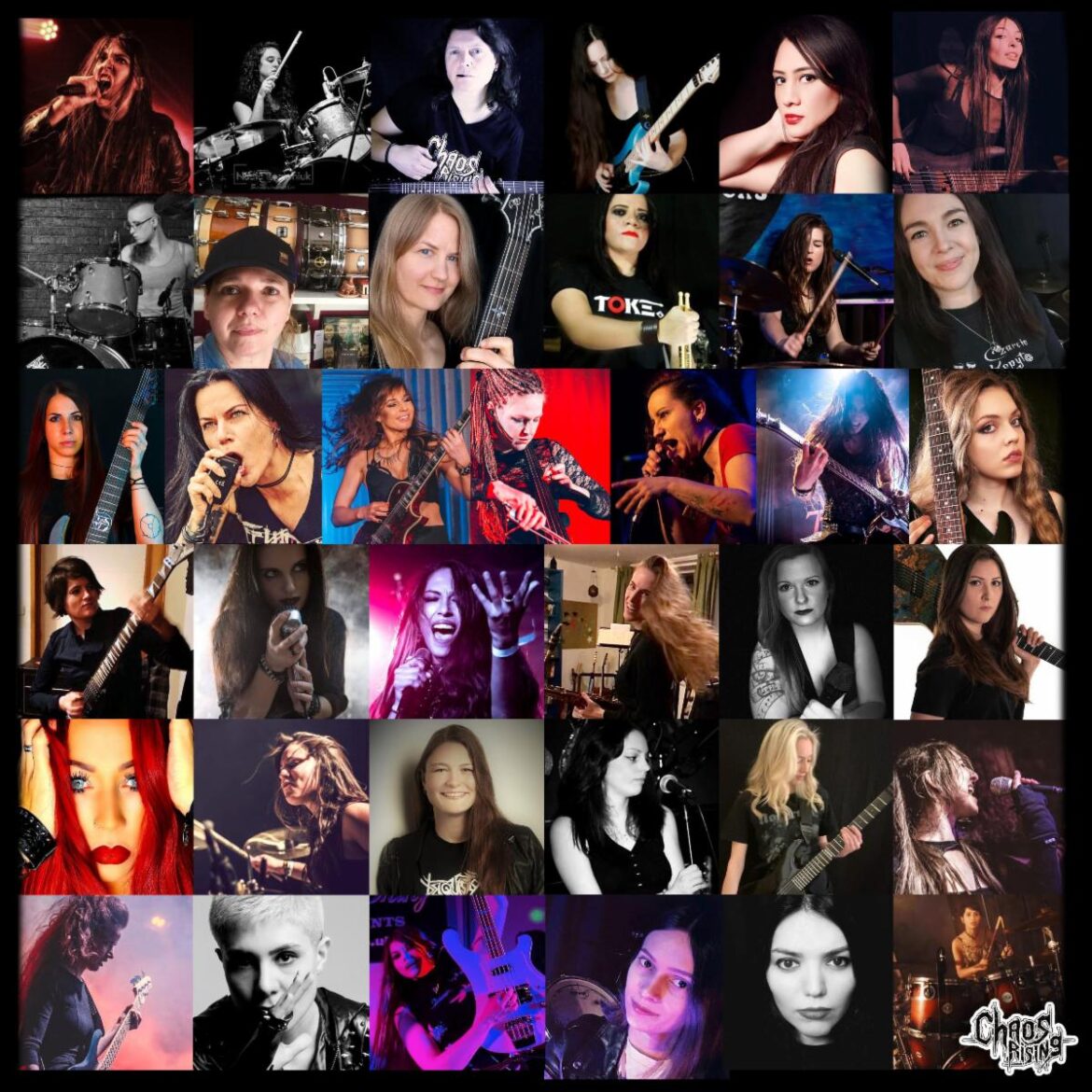 An Interview With Stéphanie Nolf and Catherine Fearns of Chaos Rising

By Rainbow Llamacorn & The Scream Queen

Chaos Rising are an intercontinental collaborative Metal project spanning throughout five continents on Earth in over eighteen countries. The world-wide collective formed in 2019 by vocalist, guitarist, and composer Stéphanie Nolf, who is based out of France and also plays in the Thrash Metal band, Unsafe. The project connects approximately forty women together from all over the world to create and play Heavy Metal Music.

Chaos Rising are set to self-release their debut album on October 14th, titled “The Singles”. It is a multi-genre, double disc compilation of twenty singles they’ve released since the creation of the project. One album is titled ‘For The Heart’, featuring the more melodic and softer styles of Metal, with subgenres spanning over Symphonic, Doom, Hard Rock and more. The second album is titled ‘For The Head’ and features the more Extreme Metal songs, with some of the genres ranging from Hardcore, to Death, to Thrash.

Ever since the beginning of Chaos Rising, the band has released a new song in a different style of Metal each month, or when they truly feel the songs are finished. Each song is created with a different group of Musicians. All of the members have met virtually through their Telegram group. Some having worked with other members before, some of them are new. Some of Chaos Rising’s members are located in France, Argentina, Serbia, Iran, Turkey, Brazil, Sweden, Italy, Switzerland, Dubai, The United States of America, Germany, Russia, Hungary, and Australia.

Stéphanie began playing Thrash Metal over 28 years ago, initially starting out with learning bass, and then progressed to learning the guitar so she could compose songs. Stéphanie came up with the idea of having an internet-based band to connect with more women who play Metal, as she has always played in bands with all men at a time when there weren’t a lot of women playing Metal, “I wanted to have something more international because it would be much more easier for me to find Musicians in Metal like drummers, for example, and guitarists. There are a lot of singers, but it is very difficult to find a woman guitarist who composes songs. I think if I had done this project only in my country, it would’ve been very, very small. It was much more interesting to do something international.” Stéphanie added later in the interview, “It would be cool if we influence young girls to play Music.”

Stéphanie’s background and taste began with the heavier side of Metal. She only recently started to compose different styles of Metal with clean singers for the project. She also composes some songs, like their Symphonic Metal song, Limbo, completely done in MIDI.

Catherine Fearns is based out of Switzerland and plays piano, keyboards, and guitar. She began as a Classical Musician before discovering Metal in her thirties, picking up a guitar eight years ago as a second instrument. After discovering Metal, she went right into the deep as she described, playing Grindcore, one of the heaviest styles of Metal. Catherine is also fan Death Metal, Hardcore, with Grindcore being her most favorite.

Chaos Rising are making a statement of inclusion and diversity in Metal, “We really wanted to fill in the gaps where women have not been so noticed. There are a lot of female vocalists in Metal, there have been for a long time, and that’s become so recognized now that we don’t say female fronted bands anymore. There are plenty of vocalists, but not too many guitarists, drummers, particularly mixing engineers. And so we wanted to show that women can do anything in Metal, and not only be the vocalists!” Catherine elaborated more, “There are certain areas of the Music industry in general, where we really want women to come forward and I think Metal is an area where things are really quite positive…Positive things are happening in that respect. If you read Metal magazines now, compared to ten years ago, and you flick through the pages, you see so many more women. And not in a ‘look, there’s a hot girl singing the front of this band’ way.”

The band’s Artwork, logos, graphic designs, and merch designs are also done in house by bassist Tina Gruschwitz, who is from Germany.

Catherine shared details on how their songs come together sounding very smooth, noting that the work that goes into it is enormous. Even if everyone in the band are in sync when they’re individually recording, when the songs are put together, some of the songs may not be as tight as they are under normal circumstances of recording. Therefore, the final product has been redone many times to get it to sound as close as possible to being together live in the studio.  “We Love the fact that we’ve managed to bring so many countries together. It is a very technical challenge to put the songs together.”

Normalize is a song Stéphanie and Catherine wrote together about the history of women’s achievements, and one of Stéphanie’s most favorite songs from the project. Catherine conveyed the message in our interview that when they do talk about women through their lyrics, it is done it in a positive way because they are a positive project.

Also, in our interview you can watch at the top of the page, Chaos Rising leaked exciting news and details about a new Black Metal style single coming out soon!

If you or someone you know are interested in being a part of Chaos Rising, you need to contact the band through one of their social media pages, where their e-mail address is also listed. It is important that the submissions be sent in good quality and you be an experienced Musician, as it is challenging to record and mix a song without being in the studio together.

Catherine pointed out they’ve been known to do songs two or three weeks, other times the communication has gone on for months or years to finish a track, “Every song is sort of an adventure, and you never know how everyone is going to work together, which is cool, it’s exciting.” 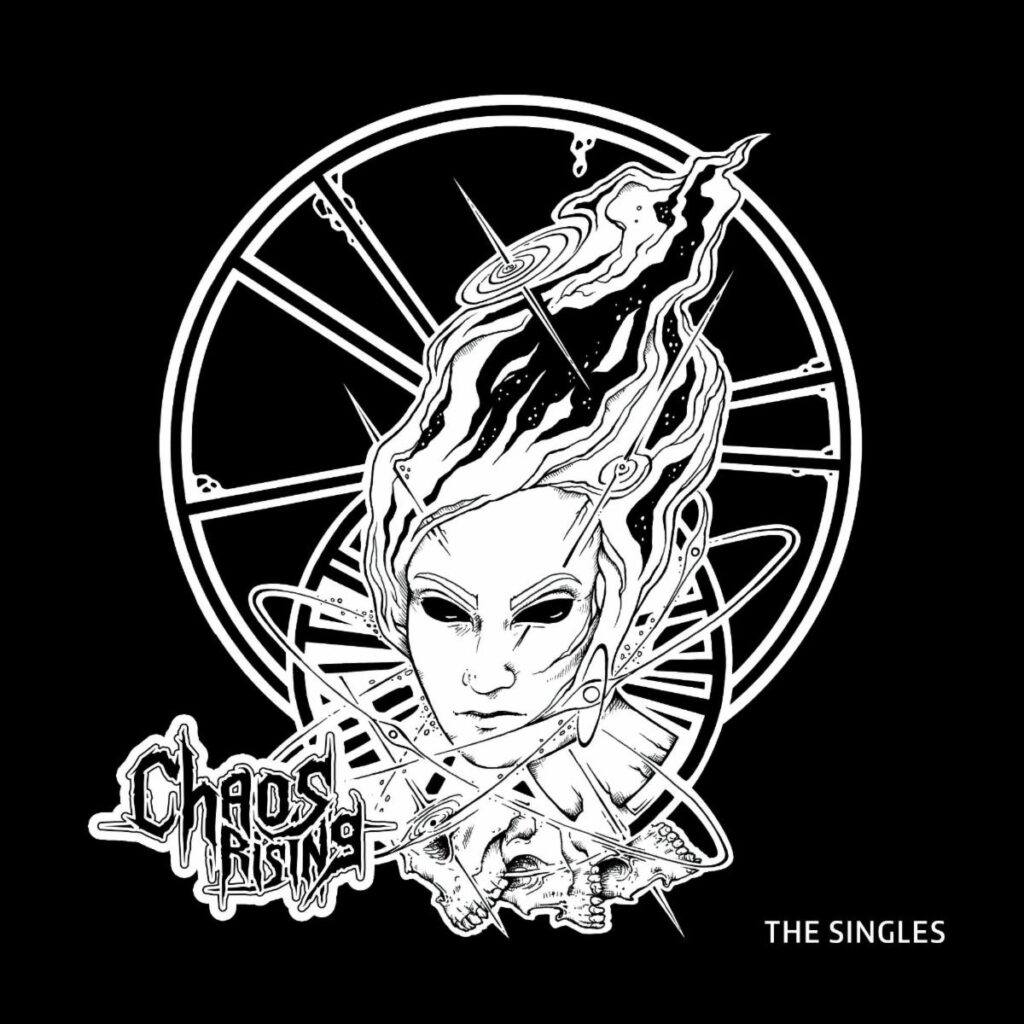 Disc 1: For The Head Tracklist

Disc 2: For The Heart Tracklist 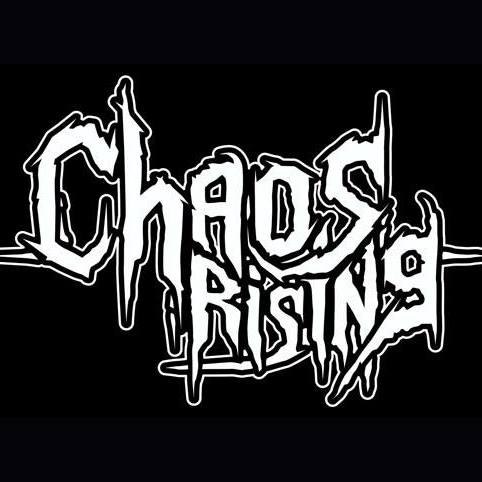