While Shotgun Facelift were performing in Fargo at The Aquarium last month, they updated Damnation Vault on everything going on with their new album, how it’s sounds, tour stories from over the Summer and a funny one involving Daeve Combs, who is now their roadie and also does some kick ass photography for his SHUTTERFOXXi page, like the photo below from when the band played in Sioux City, Iowa!

The band traveled over five-thousand miles in 2022 and feels they’ve gotten tighter as a band, “we’re really excited about this. Songs tend to kind of write themselves and I think that’s where we’re at. I think one of the songs we’re most excited about is Red River Flood, I think we kicked that out in an hour or two and we didn’t even plan on writing that day. We just got together, and we were fucking around,” John said while laughing.

Matt commented how when he was working on the riff, he wanted to add something to it, so he went home to work on some kind of intro riff to Red River Flood, “I’ve been really inspired by Gojira lately, listened to a lot of Gojira. The more I listened to that opening part, I can definitely tell from listening to Gojira, that’s where some of that vibe comes from. The opening lick that we do also returns about halfway through the song and it’s even more intense. It’s a hook in itself.” John added that it reminds him of a didgeridoo sound and also of Sepultura. Jody added, “That’s a lot of what I’ve been listening to, a lot of Soulfly and Sepultura, I guarantee when we start writing again after these last few shows, that’s going to come out somehow. There’s going to be some tribal shit going on! Brazil is going to be in America!!”

One of the things that sticks out to John, is that every single track they are doing sounds like what a Shotgun Facelift song is, “If I were to tell you “Shotgun Facelift” and you’re a fan of the band, a random song that will pop in your head base on the brand, that’s what all these songs kind of sound like.” He continued, “It’s a good place and we feel like we’re saying what we need to say as a band. You hear it and it’s like, ‘that’s fucking bad ass’.”

Matt likes the tracks they’re working on, saying it’s an evolution and enjoys how he and Damian are truly finding their sound together, ”I call this Shotgun Facelift 2.0, it’s been kind of a rebirth of sorts. Everybody’s got their say in making these tracks. It’s the next evolution.” Damian added, “I think that me and Matt, we never really got an opportunity to kind of decide and find our sound together because we were playing a lot of stuff from the old, from before Matt and Jody joined. The new album is allowing me and Matt to be more creative with each other and nail down the sound that we’re going to have. It’s louder, harder, in your face more than it ever has been.

Jody feels he’s better with the double bass, and has more focus on what the Shotgun Facelift sound is, “We do have this particular sound and when you do find that, it’s easier to write songs, and like I said, I feel like I’m a better drummer now than I was before. I’m able to put a lot more feels and a lot more stuff that I have in my head. It makes it really exciting for me because I get to go even deeper into the writing process.”

When it comes to the lyrics, John said this round, they’re getting ‘really, really, really’ deep, and elaborated, “Lyrically, one of the biggest changes I’ve made was to not couch things in metaphor. And one of the biggest things lyricists do all the time, is like they’re almost afraid to say what they really mean, they’re afraid of being that vulnerable, transparent or whatever, or maybe they’re too afraid of being nailed to the words they’re writing. But with Shotgun, everything is Groove Metal, so it was really straight forward. I decided that I didn’t want everything to be in metaphor anymore and I didn’t want things to be strange, I didn’t want people to wonder at what I was getting at, so I made a point to be really direct, and that really works well with the band. It puts this really sharp edge on it, and it comes from a very real place.”

A lot of the songs Shotgun Facelift are writing mean so much John as a person, that he needs them to exist, “I really hope people dig it and I know that they will. That’s what it feels like for me, I feel like we’re writing songs that we need to exist. We need these things to be released. We are connecting with the Music so much; we need it to be released. It’s therapeutic for us to get these things out. We’re just writing songs to stay alive, to find a way to get up the next day, to face the day, we were getting it out of our head. When you release songs, they’re not just ours anymore, they belong to the crowd.” Jody added, “That’s why we do this, we’re not getting paid millions of dollars or anything, and we do it because we want to see the crowd and the people react to what we do.”

The band also shared some stories about how people are really connecting with their song, Suicide Eyes, how even one lady Loved it so much, she paid them to play it again in the set! Another lady was so moved by the song that she got their signatures tattooed on her thigh.

Daeve jumped in and asked the question, ‘what’s next for Shotgun Facelift?‘ as John replied, “The hope is to have the new record done in December.”

Matt joked, “Some proper road cases, how about that! We’re talking about hitting some different markets, pretty excited about getting out for the possibility of hitting Seattle, Portland, Boise-area..” Matt has a lot of family out that way that he hasn’t seen in years and is excited about covering that territory of the States. “It’s just cool that what we do, our sound resonates in other markets. We’ve got five songs that are pretty much down, I’m saying we probably have five to seven more songs that we can probably crank out, and I’m way excited to see where those songs go and how it resonates.”

Curt, who is always pretty quiet in our interviews said, “I’m excited for the new Music to come.” 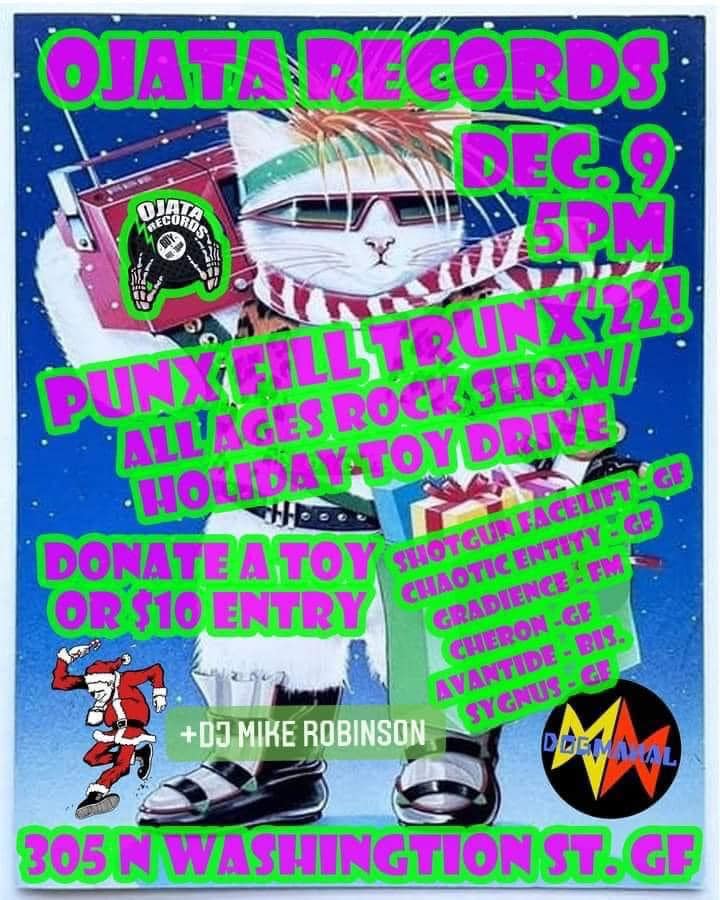 Fans can be expecting the new album probably around late Summer or early Fall in 2023 as they have to shoot some Music videos for it first, and we can also expect a new single around the Spring time. However, if you attend any of the upcoming Shotgun Facelift shows between now and then, you’ll hear some new songs like Red River Flood and See You In Hell.

Shotgun Facelift are headlining a show at Ojata Records in Grand Forks Friday, December 9th with Chaotic Entity, Gradience, Cheron, Avantide, and Sygnus along with DJ Mike Robinson, all of whom are also from North Dakota. The show begins at 17:00 [5PM] and goes until midnight. The show is ALL AGES. Bring a toy for entry or $10 cover!

The next show Shotgun Facelift is set to perform is on January 14th at The Aquarium with MVRROW and headliners, Ashfall.